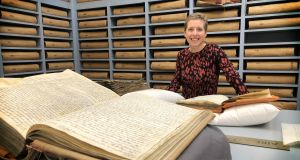 Archives manager Ellen Murphy at the Registry Of Deeds office in Henrietta Street: Searching records can be like seeking “a needle in a haystack”. Photograph: Bryan O’Brien

The Registry of Deeds, which holds records of property transactions going back to 1708, is examining digitalising its more than five million documents and making them available to the public.

The records contain a huge amount of information that would be of use to historians and those wanting to investigate their family’s past, but currently the data is difficult to access.

“It can be a needle in a haystack,” said the registry’s first archivist, Ellen Murphy.

The registry is not just a huge archive of Irish property history, it also tells the story of the social, economic and family history in Ireland in the 18th, 19th and 20th centuries, she said.

“The Property Registration Authority (PRA) is really aware of the historical significance of the material, that it should be opened up more, and the difficulty of accessing the material at the moment.”

The Registry of Deeds, which is part of the PRA, is located in the same James Gandon-designed building as the King’s Inns institute.

It contains approximately 17,000 bound volumes – the books are called tombstone books because of their shape and size – containing memorials of property transactions across the island.

The registry was initially housed in Dublin Castle, then moved to Inns Quay, and then, in 1832, to its current location on Constitution Hill/Henrietta Street.

It does not house deeds but rather memorials, or synopses of deeds, that were handwritten by clerks who worked in the office and were paid by the word. Many of the documents held by the registry are parchment.

The nature of the documents means that great care will have to be taken when scanning them as part of the digitalisation process.

“There is a lot of narrative content in the documents,” said Ms Murphy. “Wills, for instance, might have information about the jewellery the person had, and the furniture in the house, or money that is being left to a nurse.”

Details of marriage separation agreements are also contained in the registry, as well the details of wills involving property.

“There might be marriage settlement terms, ensuring the children of the woman inherited the property. There’s lots of social history in the documents.”

A huge number of Irish historical documents were lost when the public records office in the Four Courts went on fire in 1922, during the Civil War. But this did not affect the records held in the Registry of Deeds, adding to their national heritage value.

A digital strategy group has being established and a pilot project is being planned, which will in turn allow more to be said about how much a digitalisation project might cost, and how long it might take.

Meanwhile the registry, which is open to the public, organises heritage events, including lectures, tours and seminars, to make its “historical treasures” more accessible. Information about these events can be accessed at prai.ie.