Coronavirus: ‘Loss of freedom ... quite a shock at the beginning’

In their 70s, Dublin couple Brendan and Breda Butler feel hemmed in by cocooning 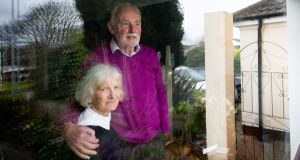 Brendan and Breda Butler safely indoors in their home in Malahide, Co Dublin: they will take refuge in reading. Photograph: Tom Honan

Brendan Butler (77) and Breda (72) were surviving day three of “the Cocoon” on Monday despite a feeling of being “hemmed in” in their north Co Dublin home.

The cocooning had “only really hit”, said Brendan. “It was a bit of a novelty on Sunday. Then we were hoping to go for a walk, but were not allowed,” he said.

The “the loss of freedom” was felt keenly, he said. Regularly, they walked “a mile and a half around Malahide. It was a major feature most days, with an espresso on the way home.”

A retired secondary school teacher, he felt lucky to be a good reader and had “just begun a course in painting, with a lot of canvasses to do”.

Breda too, a retired physiotherapist, is a reader and had just finished Sineád Gleeson’s Constellations.

But the stay-at-home directive had come as “quite a shock at the beginning”. It had made her realise how much time she spent out of the house. But “there was lots to do, no hurry, loads of time, so it’s not getting done”.

However she wouldn’t be doing any gardening, apart from “holding the ladder while Brendan trims the hedge”.

A son of theirs had brought over a consignment of food, as most of their five children live in Dublin and a daughter in Guatemala.

The biggest “loss” was their grandchildren, aged 2 to 13. She and Brendan were babysitters three days a week up to recently, when that too was stopped. “It was a big loss,” she said, and wondered whether the two year old would recognise her when all this was over. But there was social media and she was used to getting to see them on Zoom.

Abuse victim of former school principal had no idea other boys were being attacked 20:12
Covid-19: Cases increasingly occurring among young people, officials say 19:51
Dáil committee to investigate Bríd Smith comments about judge 19:32
Warning of big rise in use of crack cocaine in Limerick 19:32
Minister for Children confirms two-thirds of crèches have applied for grants to re-open 19:31