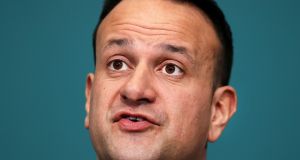 Taoiseach Leo Varadkar: he said the move did not represent the nationalisation of private hospitals. Photograph. Steve Humphreys/Reuters 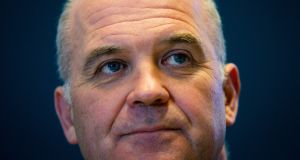 The chief medical officer Dr Tony Holohan at a press briefing at the Department of Health in Dublin. Photograph: Tom Honan

The number of newly confirmed cases was 295, the highest daily number so far. There are now 2,910 cases of coronavirus in the Republic, and a total of 54 deaths.

The patients included five women and three men; they had a median age of 86.

Six of the eight patients had underlying conditions.

An analysis of cases up to last Saturday show almost as many women as men are affected by the virus (49 per cent of cases against 50 per cent). There are 111 clusters involving 428 cases.

The median age of confirmed cases is 47 years.

One in four cases have required hospitalisation, while 84 of the 2,475 cases under analysis were admitted to ICU.

Chief medical officer Dr Tony Holohan said: “We are beginning to see encouraging signs in our efforts to flatten the curve. However, we cannot become complacent as we are still seeing new cases and more ICU admissions every day”.

Dr Holohan said the measures introduced enjoy widespread public acceptance, with 89 per cent of people surveyed say they were happy with the measures and 94 per cent expressing confidence they would be able to adhere with them.

Earlier, Taoiseach Leo Varadkar signalled that additional restrictions could be applied to people travelling into Ireland from abroad amid concern about a potential new wave of coronavirus cases.

Speaking at Government Buildings on Monday, Mr Varadkar said the Government had no plans to close the borders, but the National Public Health Emergency Team (NPHET) was considering further restrictions on inward bound travellers.

“We’re not going to close our borders. We need to enable our citizens to come home. They might be family or friends, they might also be healthcare workers who volunteer to come back and work in the health service,” Mr Varadkar said.

“We need to import things like PPE from China. We need to be able to export medicines to other parts of the world that they need.

“But the National Public Health Emergency Team last week and this week will examine whether there are additional restrictions or controls that we could apply to people coming into the country that would reduce the risk of imported cases of coronavirus resulting in community transmission here.

“That is being examined at the moment, and we should be able to do something the next couple of days.”

His comments come after one of Ireland’s leading infectious diseases experts said the Government should consider closing the country’s borders to prevent new coronavirus infections coming into the State.

Dr Paddy Mallon, a consultant at St Vincent’s University Hospital in Dublin and professor of microbial diseases at UCD, said a major risk to the State was more new Covid-19 infections coming in.

“We should be looking seriously over the next week at protecting our borders and stopping new infections coming in because it will give us the ability to control the infections that we have.”

Meanwhile, the Government has reached an agreement with private hospitals for the temporary use of their premises during the crisis.

He said that the move would free up 2,000 beds across 19 hospitals, including nine labs, 47 ICU beds and 194 ventilators.

Under the agreement the HSE has secured 100 per cent of the capacity in those private hospitals. All patients will be treated as public patients. The hospitals will be reimbursed for their operating costs.

Mr Varadkar said it was not possible at this time to indicate a precise cost for the move, but said independent accountants would examine the issue.

The agreement is in place for three months, with an option to extend that afterwards.

In a statement the te Private Hospitals Association said they “taking this unprecedented step in the national interest and view the move as a critical contribution in the overall strategic management of the pandemic in Ireland.”

“This action on behalf of private hospitals enables the HSE on a temporary and not-for-profit basis, access to the existing bed capacity, high quality equipment and the services of clinicians and health care professionals working in the private hospital system.”

Mr Varadkar also moved to clarify that childminders in the home were considered essential workers.

“There is no such thing as no risk. People who are working in the retail sector, distribution and the health service are all taking a certain degree of risk in continuing to work.

“We do have a lot of people who are working in our health service, working in transport logistics, working in medical devices and all those areas that we need ticking over, and they are often reliant on a childminder coming into their home, and we would encourage those childminders who are available and willing to work to continue to do so.”

Mr Varadkar said there is also some evidence of a slowdown in the rate of increase in new cases of Covid-19, but it was too soon to make any judgement on that.

Minister for Health Simon Harris also moved to reassure the public on the quality of imported personal protective equipment (PPE) after the Netherlands joined Spain in withdrawing coronavirus equipment bought from Chinese suppliers after finding it defective.

In the Netherlands, the ministry of health issued a recall of hundreds of thousands of face masks that had been distributed to hospitals after finding flaws that prevented them acting as effective barriers against the virus.

Mr Harris said before PPE is purchased the HSE must be satisfied that it is in line with WHO standards, and then once the PPE arrives it is inspected.