PPP to be used for 150 social homes in Clondalkin 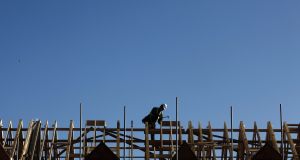 The social housing projects will be the first large-scale PPPs pursued since the collapse of the developer-led social housing system nine years ago. Photograph: Jason Alden/Bloomberg

Plans for more than 100 social houses and apartments at a vacant site owned by South Dublin County Council in Clondalkin have been approved by councillors.

The homes are the first of a batch of 500 social houses and apartments that will be built using public private partnership (PPP) deals to be approved by a local authority.

Six locations in Dublin and its commuter counties have been chosen for the 500 homes. Two other sites are in Dublin at Ayrfield on the Malahide Road and Scribblestown in north Dublin. Sites at Dunleer in Louth, Convent Lands in Wicklow town and Craddockstown in Naas, Co Kildare, have also been selected.

The homes will be built over a three- to four-year period at a cost of about €100 million. Unlike previous PPP models, the sites will stay in the ownership of the State and the developer will get payments for a 25-year period, after which the houses or apartments return to State ownership.

Plans for the Ayrfield site off the Malahide Road, the largest of the schemes with 150 apartments, will be presented to Dublin city councillors for approval next month.

Once all six schemes have been approved by the relevant local authorities, the city council – as the “lead” authority – will seek a development consortium to build, maintain and manage all 500 homes for the next 25 years.

Most of the 109 homes in Clondalkin, at a site off the old Nangor Road, will be houses, 71 with three bedrooms and eight four-beds, along with 15 one-bed apartments and 15 two-bed apartments.

The homes will be grouped on the eastern edge of a large vacant site which has been designated from 1,000 new homes, with a mix of private and social housing.

Sinn Féin, the largest party on the council has supported the PPP proposal. However, the party’s housing spokesman Eoin Ó Broin said it would be preferable if the social housing was better integrated into the overall site.

“We proposed that the 109-unit development be split into two separate sections with private housing in between. There are a number of possible reconfiguration of the development that would allow for some degree of integration and tenure mix with any future development.”

The council said that when the 1,000 homes were built there would be a “balanced tenure” with 40 per cent of the homes used for social housing.