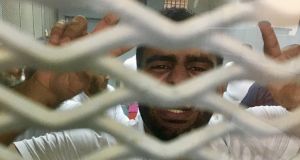 Ibrahim Halawa pictured moments after his acquittal by a court at the Wadi Natrun prison outside Cairo. Photograph: Declan Walsh/The New York Times

Minister for Foreign Affairs Simon Coveney has said he expects Ibrahim Halawa to return home to Ireland from Egypt in “a short number of days.”

The 21-year-old from Firhouse in Dublin was last week acquitted on charges relating to protests in Egypt in 2013.

He has been in prison since he was arrested four years over during protests against the removal of Egypt’s then president Mohamed Morsi.

Last week Mr Halawa was acquitted on all charges that he and almost 500 others faced in Egypt connected to the protests during a siege at the Al-Fath mosque in Cairo. His release is being processed.

Speaking at an Irish Aid event in the Department of Foreign Affairs in Dublin, Mr Coveney said the Government had asked the Egyptian authorities to expedite the procedures covering Mr Halawa’s release.

“We have obviously asked for that process to be fast-tracked because this is such an important and high-profile case. We want to see Ibrahim Halawa at home with his family as soon as possible. That conversation is ongoing,” he said.

For a prisoner to be released in Egypt following court proceedings, the country’s prosecutor general must write to the prison service directing their release, the Minister explained.

Mr Coveney said his understanding was that a draft of a letter from the prosecutor general to the prison service has not yet been acted upon.

When Mr Halawa is released from the prison, he will be sent to the security directorate in the centre of Cairo and from there on to the police station where he was originally arrested and he will be released there.

“Once he moves from the prison to the security directorate, things will happen very quickly we are told after that,” said Mr Coveney. “This is a matter of a short number of days until he comes home in my view but we will keep working on it diplomatically until that happens.”

A spokesman for the Department of Foreign Affairs said it had not yet made travel arrangements for Mr Halawa’s return to Ireland but that officials would book him air travel as soon it becomes aware of when he is going to be released.

Mr Halawa was born and raised in Dublin and is the son of the most senior Muslim cleric in the State, Sheikh Hussein Halawa, imam of Ireland’s largest mosque, in Clonskeagh, Dublin.

Originally from Egypt, Hussein Halawa and his wife moved to Ireland a year before Ibrahim was born. The family were regular visitors back to the couple’s home country.

Ibrahim Halawa was 17 when in the summer of 2013, during a family holiday to Egypt, he was involved in anti-government protests in Cairo in support of the ousted Morsi.

He and his three sisters, Somaia, Fatima and Omaima, were sheltering in the Al-Fath mosque in the city on August 17th, 2013 when the building was stormed by Egyptian security forces.

His sisters were also arrested but released after three months and allowed to return to Dublin. All three, who were tried in absentia, were acquitted of all charges.