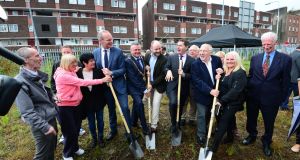 Turning of the sod in June 2016 for the regeneration scheme for Dominick Street flats in Dublin. The project is running more than a year behind schedule. Photograph: Dara Mac Dónaill

An extra €10 million is needed to rebuild the 1960s social housing flat complex at Dominick Street in Dublin, which is more than a year behind in its development, according to new information from Dublin City Council.

Former minister for housing Simon Coveney had in June 2016 allocated €22 million for the regeneration of the 1960s flat complex which faces the new Cross City Luas line, just off Parnell Street in the north inner city.

Work was to start in autumn 2016 with residents due to move in to their new homes early next year. However work has yet to begin on the 72 apartments.

Tony Flynn of the council’s housing department told councillors on Thursday he was preparing to submit a revised cost/benefit analysis to the Department of Housing seeking an increase in funding from €22 million to €32 million to allow the project to go ahead.

“The revised cost/benefit takes in inflation in construction and other national wage agreements that were agreed quite recently,” he said. The full cost of the project, which also involved the construction of shops and other facilities, had risen to €29 million. “The council is going to fund €7.1 million for retail and commercial, so now about €32 million is needed for the social housing,” Mr Flynn said. Community facilities will also be included in the project.

The Dominick Street scheme was one of five large-scale housing projects the council was pursuing in partnership with Bernard McNamara, before the collapse of the PPP system in mid-2008.

Separately, Minister for Housing Eoghan Murphy is to attend next Monday’s council meeting to answer questions on the housing and homelessness crisis in the city. The meeting will be Mr Murphy’s first with the State’s largest local authority, where he formerly served as a councillor for Dublin South East, since he took up his position last June.

Mr Murphy was sharply criticised by councillors for not attending last month’s city council meeting. Lord Mayor of Dublin Mícheál MacDonncha said he had in June invited Mr Murphy to attend the September council meeting to discuss homelessness and the housing crisis.

He said he was disappointed Mr Murphy had decided not to attend the meeting, “particularly when we have just had a summer during which the housing crisis worsened”.

During the council meeting, a number of councillors accused Mr Murphy, formerly a member of the local authority, of being dismissive of their role in addressing the housing crisis.

However, Mr Murphy subsequently said he had been “treated unfairly” by Mr Mac Donncha.

Mr Murphy said an invitation to attend the meeting had not formally been made to his department, but had been extended through Fine Gael councillor Paddy McCartan, and he had accepted.

Mr Murphy said he had then suggested a special meeting solely to deal with the issues of housing and homelessness be held, and he was told this was acceptable, but he has now agreed to attend Monday’s meeting.

Mr MacDonncha’s criticism had taken him by surprise and had come “completely out of nowhere”, he said. “I think he’s treated me very unfairly.” He said he was not “hiding” from or trying to avoid the council, “quite the opposite”.