Hotels withdrawing permission for pro- and anti- meetings over ‘intimidation’ 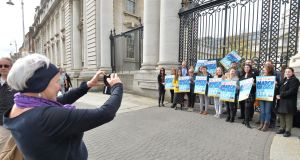 Bríd Smith TD takes a picture of the members of the Oireachtas employees for choice gathered outside the Department of the Taoiseach. Photograph: Alan Betson

Both anti-abortion and pro-choice groups have complained about venues withdrawing permission for campaign meetings due to “intimidation” and pressure from rival factions.

Three Dublin hotels have cancelled anti-abortion events this week due to online campaigns from pro-choice activists, according to the organising groups.

The groups allege pro-choice activists engaged in online “abuse” of hotel staff to force the cancellation of the events.

Pro-choice campaigners have in turn complained of a number of venues withdrawing permission for events to be held on their premises due to their “political” character.

Niamh Uí Bhriain of the Life Institute said her organisation, in association with another anti-abortion group, Unbroken, had booked conference facilities in the Gibson Hotel in the IFSC for an event due to be held on Thursday evening.

The event involves women who have been raped or were born as a result of rape speaking on the topic of abortion.

“At the end of last week The Gibson rang and said the event was cancelled. We were pretty shocked,” Ms Uí Bhriain said.

The hotel had told her “it was afraid of abortion protesters and of what it would mean for the hotel. They were afraid for the safety of the hotel and the staff. We tried to persuade them but they weren’t persuaded”.

Ms Uí Bhriain said the event was then moved to the Spencer Hotel, also in the IFSC, and that the organisers warned the hotel it might get complaints. She said the Spencer cancelled the event three days later, citing abuse and intimidation its staff members were receiving online.

She said activists tracked down the personal social media accounts of hotel staff to object to the event. “I can actually understand where they [the hotel] are coming from; the staff were intimidated.”

A spokeswoman for The Spencer refused to say if its staff had received threats or intimidation and said it would not publicly discuss a private contract.

The Gibson has yet to respond to requests for comment.

The meeting went ahead last night in a public square around the corner from the Spencer Hotel with a sizeable crowd turning out to hear several speakers talk on the issue of women who become pregnant from rape.

Louise, a woman from the UK who addressed the crowd and asked not to be further identified, was 18 when she was raped and found herself “railroaded” into having an abortion.

“I grieved terribly for the baby,” she said. “My feeling is at the moment women and babies in Ireland are protected ... If the eighth amendment is done away with, women will end up having abortions they don’t want.”

A number of gardaí surrounded the square but there were no signs of counter protests.

Separately, another anti-abortion group, Human Life International, has complained that the Ashling Hotel on Parkgate Street in Dublin refused to host an event it planned for this Saturday on the alleged health consequences of abortion.

“We had booked it a number of weeks ago. We had put a significant amount of money into advertising,” said the group’s executive director, Patrick McCrystal. “Folks who advocated a pro-abortion viewpoint started to contact the hotel. The manager himself said there were diatribes, intimidation, threats, to such a degree that he had no choice but to cancel.”

Mr McCrystal called on the Garda to investigate alleged threats.

The Ashling Hotel was also asked for comment but had yet to respond.

The Human Life International event is now being hosted by the Spencer Hotel instead. Mr McCrystal said that as far as he knows, it is still going ahead there on Saturday.

Groups campaigning to repeal the eighth amendment also said a number of venues for their meetings had been cancelled due to pressure from anti-abortion activists.

In the last month organisers of three “Repeal the Eighth” meetings in Dublin had to find alternative venues after permission was withdrawn on the grounds that “political meetings” were prohibited.

In Tallaght, People Before Profit councillor Emma Hendrick had to find a new venue for once such meeting she had organised for last Monday after management at the Kilnamanagh Family Recreation Centre called her that morning to cancel it.

She said she had told the centre last month it was for a Repeal the Eighth meeting and there was no problem. But “on Monday morning I got a call from a gentleman at the centre who said the centre didn’t host political meetings. I asked him why I hadn’t been told this before, and he said he had only just found out about the meeting”.

When contacted, a spokeswoman for the centre said: “We don’t want to talk about that.”

In Raheny, Dublin, Solidarity councillor Michael O’Brien had to find a new venue for a Repeal meeting on September 21st after management at the Grange Woodbine Community Centre cancelled his booking.

When contacted, the club said it had a policy of not allowing political meetings in the bar.

In Ashtown, Dublin, a Repeal meeting planned by Solidarity TD Ruth Coppinger was cancelled by the manager of the Douglas and Kaldi café in early September, the day before it was to take place. Ms Coppinger said she made it “absolutely clear” what the meeting was about when booking.

But Aileen Kelleher, owner of the cafe, said she had not known the meeting was political and cancelled it when this was drawn to her attention. “We don’t allow political meetings,” she said. The meeting was held elsewhere.