The Kurds of Leitrim: from refugee camps to Carrick-on-Shannon

‘Maybe it wasn’t our ways . . . but the way they respected us was huge’ 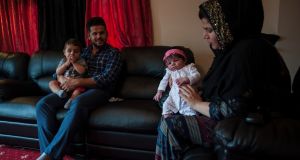 Jabar Azizi and Surat Ahmed with their children at home in Carrick-on-Shannon. Aziz was among the nearly 100 Kurdish refugees who were resettled in town. Photograph: Paulo Nunes dos Santos/The New York Times

A bold black-and-red sign announces Jamshid Ghafur’s business – “Kurdish Barber” – up a narrow flight of stairs just off the main street of Carrick-on-Shannon.

Here, patrons have their hair trimmed under the watchful eyes of the Irish fighter Conor McGregor, whose poster hangs high on a wall. On the opposite wall, hangs a Kurdish flag, the décor a simultaneous nod to Ghafur’s homeland and the town where he lives.

“I am happy with this small business,” he said as he gestured around the shop with pride. “I feel like home here.”

The 37-year-old is part of a thriving group of Kurds who adopted this Co Leitrim town as their own after a United Nations-supervised refugee resettlement program brought them here more than a decade ago.

Kajal Allakarami, (29), was 17 when she arrived. “We said it was like heaven when we came,” she said, as she bounced her own daughter on her knee while sitting on a cushion at the floor of her mother’s home. The smell of a spiced beef and chickpea stew cooking in the kitchen filled the room. “Maybe it wasn’t our ways, maybe it wasn’t our traditions,” she said, “but the way they respected us was huge”.

In 2005 and 2006, around 100 Kurdish refugees, most Muslim, arrived in Carrick-on-Shannon, population 5,000, plucked from decades of displacement.

Now, Kurdish-owned businesses have opened in town, one of the county’s best hurlers is a Kurdish man, and Nowruz celebrations are held to mark the Kurdish new year. The number of Kurds has grown as members of the first wave married and had children.

The group of families who settled here originally fled the Kurdish region of Iran in 1979 because of political persecution, and found relative safety across the border in Iraq, where some lived for nearly 25 years in Al Tash, a refugee camp.

They fled again in 2003, when the Iraq War forced them into a no-man’s land at the border with Jordan. They were stuck there for three years before the UN resettled them. Allakarami arrived in Carrick-on-Shannon with her parents, Fawzieh Amiri and Aziz Allakarami, and her six siblings – all thrust abruptly into the parochial life of a small Irish town.

The government provided social welfare and language courses for the adults, while the children enrolled in the local schools. Volunteers brought food and clothes, Amiri said. Among them was Sr Nora Burke, who visited Amiri weekly to help her practice English.

Still, the adjustment was not easy. Sr Burke said some locals resented the state-funded support the Kurds received.

“Carrick-on-Shannon was not prepared,” she said. “They just arrived and some in Carrick thought: ‘God, who are these people? Where did they come from? What are they here for?’ People say to me, ‘oh, they integrated so well’,” she said, “but they struggled to no end”.

Shortly after the Kurds arrived, the local gaelscoil found its enrollment increasing. Many in town said it had less to do with any particular interest in the language than with the influx of the Kurds, as well as a wave of Latvian and Polish students at the other primary schools in town.

Also, jobs in a small county like Leitrim are scarce at the best of times, and for the newly-arrived Kurds, the added barrier of a new language and culture made the search for employment more difficult.

But, bit by bit, the Kurds established themselves.

Amiri’s family lives in a modest home in a housing estate on the outskirts of the town, the air inside thick with the smell of spices wafting from the kitchen. The family now includes 11-year-old Khomar, born shortly after they arrived in Ireland. Amiri affectionately calls him her “little Irish man”.

Her husband takes pride in the small patch of land behind their home, where he grows potatoes and tomatoes. He still struggles with the language, but his wife has enough English to work at Cryan’s, a local hotel and pub. He’s now the primary homemaker, a stark role reversal in their traditional culture.

“I’d like to understand this country,” Amiri said of how she has embraced this new life. For members of the younger generation, resettlement has been a complex process of not just understanding Ireland but of coming to terms with their Kurdish and Irish identities.

Zemnako Moradi used sports to bridge the divide. Named after a mountain in Iraqi Kurdistan, but dubbed Zak when he came to Carrick-on-Shannon at age 11, he began training with the local Gaelic Athletic Association almost as soon as he arrived. He found his stride in hurling.

“It’s a small community,” Moradi said, crediting the club with helping him adjust to life off the field and opening pathways for jobs and socializing. “You all stick together.”

He has since moved to Dublin – where he has picked up the thick accent of the city – but still calls Carrick-on-Shannon home and competes with Leitrim’s hurling team.

Some found the adjustment more difficult. Jabar Azizi and his twin brother were 16 when their family arrived. “My age group, it was really, really difficult for us,” Azizi said. “Even though I was in Ireland, my mind was somewhere else.”

Azizi plays soccer a few times a week with other Kurdish men at a small field in Carrick’s Aura Leisure Center. He has his own business; he owns a car wash in a nearby town.

It took tragedy for the Azizi family and the rest of the Kurdish community to know they had found a true home with their new Irish neighbours. In March 2012, Jalal Azizi, Jabar’s twin, was swimming with friends in the Shannon river during a rare warm snap when he got into difficulty and drowned. The whole town was shaken. Shops shut their doors and residents lined the road to pay their respects as the 21-year-old’s funeral cortege passed by.

“To be honest, we didn’t expect that with our brother,” Azizi said. “His death really touched everyone.”

Strangers visited his home, and rallied around the family, bringing food and offering condolences. The family bonded with Joe and Rosie Dolan, owners of the Bush Hotel, who had lost their own son a year earlier. A year later, they were there when the town planted an oak sapling to honor Jalal. A small plaque in a riverside park now memorializes the young man.

“When he passed away, we saw all the community from Carrick-on-Shannon gathering in my house,” Azizi said.