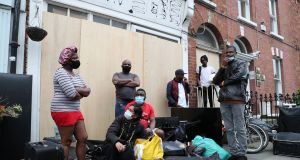 The evicted tenants among with their belongings outside the property on Berkeley Road in Dublin on Wednesday. Photograph: Nick Bradshaw

The Irish Property Owners’ Association (IPOA), has said it was “concerned with the manner” in which an eviction took place of nine tenants from a house on Berkeley Road, Dublin this week.

Several men entered the house opposite the Mater hospital on Wednesday morning and instructed the tenants inside to leave and then boarded up the front door and windows.

Video footage shows a number of gardaí attended the eviction and watched as one of the tenants was physically removed from the property.

On Thursday, activists with the Dublin Central Housing Action group removed the boarding and the tenants re-entered the property. The tenants claim they had not been served written eviction notices to vacate the property prior to it being repossessed on Wednesday.

Gerry Ward, who had earlier been the tenants’ landlord, said he had been involved with the property since around 2004. He said there was a legal dispute over it since 2017 with a property fund, Beltany Property Finance.

He said he had not been aware of the property’s repossession until he was contacted by the tenants.

Landlords’ representative organisation, IPOA, said tenants should not be caught up in disputes between property owners and financial institutions.

“While we are aware that difficulties arise in cases where repossession by financial institutions cause friction, the occupiers should not be involved. Legislation should be adhered to,” the association said.

“Where a dispute arises between property owner and tenant it may be referred to the RTB [Residential Tenancies Board] for resolution in an organised manner.”

A Garda spokesman said legal representatives of the property’s owner attended Mountjoy Garda station on Wednesday “to inform gardaí that they intended to secure their premises”.

On re-entering the house on Thursday tenants found significant damage including broken windows, doors and toilets.