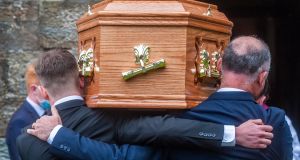 PJ Sheehan’s coffin is carried into Church of our Lady, Star of the Sea and St Patrick’s in Goleen, west Cork on Thursday. Photograph: Andy Gibson. 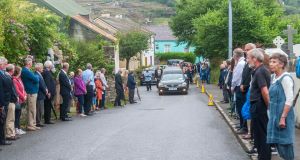 The late Fine Gael TD, Paddy Sheehan (87) may have had a reputation for wit and humour but he was also a tireless worker for his beloved west Cork and his family can be truly proud of his legacy, Minister for Foreign Affairs, Simon Coveney told mourners at Mr Sheehan’s funeral.

Mr Coveney told family and friends at Mr Sheehan’s funeral in his native Goleen near the end of the Mizen Peninsula that the late Cork South West TD had been a passionate champion for rural and coastal communities all around Ireland but most particularly west Cork.

“Paddy was a tireless worker – he was elected to Cork County Council in 1967 and he held that seat for 40 years and after he was elected to the Dáil in 1981, he won a national reputation as a fearless advocate for rural and coastal Ireland, delivering another pier, a new road surface, year after year.

“The small suckler farmer, the ferry operator, the inshore fisherman, the grocer, the GAA official, the stonemason, the RNLI crew, the local pensioner, the tourist operator, the small hotelier – they all had a voice through Paddy for almost half a century,” said Mr Coveney in his graveside oration.

Recalling that the late Mr Sheehan had “most bases covered before he ever entered politics” from his time working as an auctioneer, small farmer, shopkeeper, merchant and community activist, Mr Coveney said his winning back a seat for Fine Gael in west Cork in 2007 was a huge achievement.

“When he regained a seat for Fine Gael in Cork South West in 2007 at the age of 74, I remember him laughing off the criticism that he was getting too old for politics in his final term. He brushed it off by saying ‘Sure I’m younger than the Pope and that’s good enough for me’.”

Mr Coveney also recalled how close Mr Sheehan was to his late wife, Frances who died just a week before him on August 3rd and how inseparable they were with his wife driving him the six hour journey from Goleen to Dáil Éireann every working week from 1981 until 2002.

“Politics can be a tough career but Paddy and Frances made light of endless clinics in the back of pubs across west Cork, of funerals, dinner dances and constant representations, year after year – Paddy was energised by public service and his children and his grandchildren can be proud of him.”

Leading the mourners at the funeral Mass at the Church of Our Lady, Star of the Sea in Goleen, celebrated by curate, Fr Anthony Buckley, were Mr Sheehan’s adult children, Dermot, Deirdre, Eucharia and Maebh and his grandchildren, Caragh May, Gearoid, Ciaran and Ellen.

Earlier, the people of west Cork had come out to pay their respects with dozens lining the streets of Durrus, Ballydehob and Schull and others coming out on the road to Goleen to say a final farewell to the man who represented them for over 50 years.