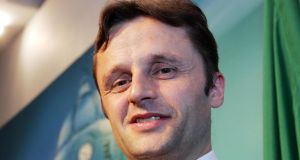 Adoption Authority chairman Dr Geoffrey Shannon: “It was challenging but rewarding that we managed to ensure that no child failed in their desire to be adopted.” Photograph: Eric Luke

Up to 40 children were adopted by long-term foster parents after the Adoption Authority took last-minute action to ensure that Covid-19 restrictions did not block their chance of adoption.

Adoption orders cannot be granted once a child turns 18 years of age, but the law also requires that evidence is given in hearings by all parties, including the natural parents before a final adoption order is made

The Covid-19 restriction meant that face-to-face hearings could not be held, so the Adoption Authority opted for videolink hearings, where the children gave evidence remotely from their own homes.

Launching the authority’s 2019 annual report on Tuesday, its chairman Dr Geoffrey Shannon said the children were extremely comfortable while they gave evidence.

“What I felt particularly interesting was hearing children who were, remotely, in their world, not in our world and children felt very comfortable tendering evidence in their world,” said Dr Shannon.

“It was certainly clear that children felt they were heard . . . maybe there are lessons to be learned,” he said.

Adoption Authority staff worked through the lockdown in March and April to process the applications of children whose adoption by long-term foster parents was eased by the Adoption Amendment Act 2017.

“It was challenging but rewarding that we managed to ensure that no child failed in their desire to be adopted,” Dr Shannon told The Irish Times,

“These children were going to age out during the pandemic and there needed to be a response,” Dr Shannon said of the highly unusual circumstances. “If we were to have waited, there was no possibility of the child being adopted [once they turned 18].”

In total, between 30 and 40 applications were finalised between March and July, a “child-friendly” pandemic response Dr Shannon described as the high point of his chairmanship.

Meanwhile, the authority’s 2019 annual report noted it had taken about 13,000 adoption files and records from Cúnamh Adoption Agency, formerly the Catholic Protection and Rescue Society of Ireland, which closed down last year after more than a century.

That followed the passing of the Adoption (Information and Tracing) Bill which placed all responsibility for adoption information solely on State agencies.

The authority received 560 applications to the National Adoption Contact Preference Register which mediates contact between adoptees and birth relatives, leading to a potential match in 115 cases. The total number of entries now stands at over 14,500.

It received 71 requests from adopted people for the release of their birth certificate which are now being “actively considered”.

Altogether, 79 domestic adoption orders were granted in 2019, the majority (51) of which related to stepfamilies. Twenty-one orders were made in respect of children who had been in long-term fostercare.

Of the orders granted last year, 35 related to 17 year olds.

In total, 104 declarations of eligibility and suitability were granted to those pursuing domestic adoptions, an increase of 25 over 2018.

Dr Shannon said that although non-essential travel had interrupted or slowed progress in foreign adoptions, no children had been left in legal limbo as a consequence.

In 2019, the authority granted 48 declarations of eligibility to people seeking to adopt abroad and extended 27 existing declarations by a year.

Ireland operates adoption arrangements with a select number of countries. Last year a total of 33 foreign adoptions were recognised by Ireland, with the highest number, 18, coming from Vietnam.

1 Coronavirus: From midnight Dublin will move to level three until October 10th - Taoiseach
2 Wife not entitled to deceased husband's entire estate, High Court rules
3 Life in Level 3: What will happen under new restrictions in Dublin?
4 President Higgins says British must face up to their history of reprisals
5 Cluster among golfing group in Midlands a 'significant Covid-19 incident'
Real news has value SUBSCRIBE