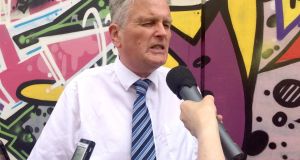 A long-time anti-abortion campaigner has hit out at the portrayal of Northern Ireland as an archaic “antediluvian society” amid growing pressure at Westminster for reform of the region’s strict law.

Former Liberal Democrat MP Lord Alton of Liverpool, who quit the party over the issue more than two decades ago, questioned the right to “export” legislation from Great Britian, which he claimed had led to around nine million abortions.

Speaking in the House of Lords, where the issue was debated on Wednesday, he argued it was for the people of Northern Ireland to decide.

However, a number of other peers backed MPs calling for the liberalisation of the abortion regime in the North, where terminations are banned in all but extreme circumstances.

Earlier, a high-profile Democratic Unionist and former Stormont health minister compared the abortion regime in Britain to the Holocaust.

Jim Wells claimed the numbers murdered by the Nazis in concentration camps were comparable to the number of terminations since abortion laws were relaxed in England, Scotland and Wales.

The vocal anti-abortion campaigner was taking part in a radio debate on BBC Radio Ulster’s Nolan Show when a commentator with an opposing view accused the DUP of characterising pro-choice voices in British politics as “like the Nazis” and claiming there was “something worse than the Holocaust happening in England”.

The South Down Assembly member replied: “I don’t think he’s too far wrong.”

Mr Wells, who recently lost the DUP whip after criticising the leadership, went on to say: “9.2 million people have had their lives terminated through abortion in Britain since 1967.

“That is actually more than the number of lives murdered in the gas and concentration camps of Auschwitz and Buchenwald.

The politician later clarified that his comparison to the Nazis was only related to the “numbers” involved.

“I think the numbers are a fair comparison because these human beings have been killed,” he said.

“I don’t agree with that,” she told UTV.

“I think it’s the wrong use of language and again it brings us back to the fact that this is a very emotive issue and people need to be aware of that when they are discussing it.”

The spotlight has focused on the Northern Ireland’s restrictions on abortion following the landslide pro-choice referendum vote in the Republic last month.

The UK Government has resisted calls to act amid the ongoing deadlock at Stormont, insisting that any decision on abortion in the region has to be taken by the Northern Ireland Assembly, which is currently suspended.

Supporters of reform are urging the repeal of sections 58 and 59 of the Offences Against the Person Act (OAPA) 1861, which criminalises abortion.

Raising the issue in the House of Lords, Liberal Democrat peer Baroness Barker said: “Do the Government not think it is wrong that women in Northern Ireland can be coerced to continue with a pregnancy under legislation passed in 1861 by MPs, all of whom were men elected solely by men?”

Health Minister Lord O’Shaughnessy said: “It has been the position of successive governments that abortion policy and law is a devolved matter for Northern Ireland, to be decided by elected politicians in Northern Ireland on behalf of the people of Northern Ireland.”

Opposition spokesman Baroness Thornton pointed out the assembly was not currently meeting and argued what was being proposed was “not a devolved matter”.

DUP peer Lord Morrow said: “Would the Minister agree with me that if, in fact, Westminster legislates on this matter, effectively devolution has been put off for a long time? Does he accept that this is a matter for the people of Northern Ireland and its elected representatives?”

Lord O’Shaughnessy said: “I agree that it is and should be a decision for the elected representatives of the people of Northern Ireland.”

Lord Alton, who sits as an independent crossbencher, said: “Will the Minister agree that the caricature of the people of Northern Ireland as living in some antediluvian society has to be measured against a law that has led in Great Britain to some nine million abortions.

“Is that something that we have a right to export to Northern Ireland, or do we not have a belief in devolution and the right of people in Northern Ireland to make up their mind on that issue for themselves?”

Lord O’Shaughnessy said: “I would not presume to make a caricature of the people of Northern Ireland in one way or another.

“What this debate has demonstrated is that there are deeply held beliefs in this area and, of course, there are significant consequences of decisions on abortion law in one regard or another.

“It has emphasised that those decisions, which are incredibly significant, ought to be made by the people whom they affect, via the elected representatives whom they put in power.” - PA