Magdalene laundries: ‘I often wondered why were they so cruel’

June 6th, 2018: After two days of events organised by Justice for Magdalenes former Magdalene Laundry residents felt that they finally 'got justice' and are 'believed and accepted as real people'. 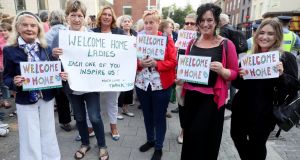 Members of the public wait outside the Mansion House in Dublin to greet survivors of the Magdalene laundries. Photograph: Brian Lawless/PA Wire

Mary and Bridget (not their real names) had just sat down in the Oak Room in Dublin’s Mansion House when they recognised each other from many decades before.

They had been best friends in a Limerick orphanage and later at a Magdalene laundry in Cork.

They had not met in the 60 years since and neither had spoken publicly, or privately, about their experiences in the laundries.

Mary said this was down to “embarrassment”.

“Today was my first day to be able to talk,” she said, adding that she had been to a counsellor for one session but got such a heavy nosebleed that she had to be hospitalised.

“I don’t know what it has done to me. You don’t feel that you’re the same as an ordinary person, I always feel that way. I won’t lose it now at 80, I’ll go to my grave that way.”

The women were among the more than 200 who came to Dublin this week for a series of events, organised by Justice for Magdalenes Research and businesswoman Norah Casey. The gathering aims to pay tribute to the women who spent time in 10 laundries across the State run by four religious congregations, where they were detained and made to work for decades in some cases.

Bridget (77) summed up her reservations about speaking of the past with the word “stigma”.

She was put into the orphanage with her two sisters when her mother abandoned the nine children. Her brothers were sent to an industrial school and she remembers her father as “a cruel man” who “took it out on us”.

“He used to leather us with his belt,” she said, adding that he used to say “disappear you, you remind me of your mother”.

Mary was placed in the orphanage as a baby and then moved to a laundry.

Bridget was “not quite 16” when she was taken out of the laundry to work with her sister in England, where she has lived most of her life. She married and had two children.

Both women have awful memories of their years with the nuns.

Bridget remembers arriving at the laundry where “they took me into the church, hypocrites you know, praying themselves and then gave me this big old long dress to put on and then took me up to this room.

“There was a lady in there and she was dying in terrible agony. The nun that was there took me over to this lady and said ‘do you see this? She has never done anything and she is suffering in agony for your sins’.”

It reminded Mary of an episode when she broke the silence by speaking to another girl.

“The nun got the two of us and brought us out and she put us in with a corpse. One of the old ladies had died.” They were left there all night with the corpse and to this day, Mary says she has not attended a funeral, even of friends.

Mary said that at night time the dormitory would be locked.

Bridget remembered being caught giving bread to her sister. She was made wear a cardboard sign with “thief” written on it.

“You weren’t allowed go and sit down.You stood there where everyone coming would see ‘thief’,” she said.

Mary said she did not even know her age until a solicitor found out for her in recent years. “She got it through the courts,” she said.

Neither woman could understand why there was so much cruelty, with Mary saying: “They were nuns and educated and took up their vocation to go in there for prayer and looking after us. I often wondered why were they so cruel”.