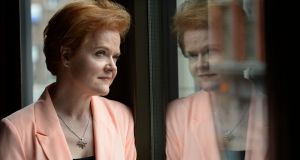 Ursula Halligan of the We Are Church Ireland group which has started a petition calling on the pope to change Vatican theological language “that is gravely insulting to LGBTQI people”. Photograph: Dara Mac Dónaill

Same-sex couples can no longer be full members of the Presbyterian Church in Ireland nor can their children be baptised, the church’s general assembly has decided.

The church, members of which are meeting in Belfast, earlier this week decided to loosen ties with the Church of Scotland as the latter moves towards approving same-sex marriage.

The decision followed discussion on a report by the church’s doctrine committee, which concluded that “in the light of our understanding of scripture and the church’s understanding of a credible profession of faith it is clear that same-sex couples are not eligible for communicant membership nor are they qualified to receive Baptism for their children”.

“We believe that their outward conduct and lifestyle is at variance with a life of obedience to Christ,” it said.

The Presbyterian Church said it “has a clear position on marriage and human relationships based on the teaching of the Bible” and taught that “homosexual activity is not consistent with Christian discipleship since it does not accord with the will of God expressed in his moral law.”

Rev Trevor Gribben, Presbyterian general assembly clerk, said this “demonstrated that a majority of assembly members felt that both denominations have drifted far from biblical truth in relation to marriage, and were in fact ignoring the authority of scripture”.

Meanwhile in Dublin, the We Are Church (WAC) Ireland group has started a petition calling on Pope Francis to change Vatican theological language “that is gravely insulting to LGBTQI people”.

The group said the use of “words like ‘objectively disordered’ and ‘intrinsically evil’ to describe any human being is wrong but for an institution like the Catholic Church to teach that these words are an expression of the mind of God to describe her image in LGBTQI persons is not alone scandalous but blasphemous”.

The petition was launched by Ursula Halligan of WAC Ireland, Senator David Norris and Pádraig Ó Tuama of the Corrymeela Community.

Brendan Butler, the group’s spokesman, said it was encouraging “every Catholic who continues to be enraged by this Vatican unchristian language to sign the petition demanding the withdrawal of this offensive language to describe our LGBTQI sisters and brothers”.

The petition can be found on Change.org