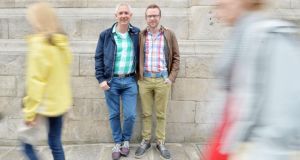 Almost three years after the electorate voted to recognise same-sex marriage, the computer system at the heart of the State’s taxation system still does not. Civil partners who married after the May 2015 referendum on marriage equality, and are now seeking to be recognised as wife and wife or husband and husband on their annual tax certificates, cannot have their union recognised by Revenue’s computers.

Although civil partners and married couples are treated identically for tax payments and credits, if they were civil partners before getting married then their certificates will still record them as such, and cannot update them to spouses.

“The status of civil partnership cannot be dissolved on our system,” a spokeswoman said. Revenue is “endeavouring to devise a workaround” but does not know how many couples are affected.

We were civil partners and we made a decision to be married. The voters recognised our right to change our status, but Revenue doesn’t seem to

John O’Sullivan and Seamus White, a couple from Dublin, married in March 2016 after having been civil partners. Mr O’Sullivan sent their marriage certificate to Revenue in July that year. “I didn’t chase it up. I assumed it would take a few months for the changes to be made. We are both part-time lecturers, so we need our tax-credit certificates to swap credits around. In January 2017 we got our tax-credit certificates and it still said ‘civil partners’.

“So I rang them and asked why we weren’t recognised as husband and husband, and they said they were ‘working on it’. They said there was an issue and they would get back to me, but they didn’t. I rang a few times, and they just kept saying they’d get back to me.

“I know it’s not the most pressing issue in the world, but it’s frustrating and it’s hurtful. We were civil partners and we made a decision – a very important decision to us – to be married. The voters recognised our right to change our status, but Revenue doesn’t seem to. It’s frustrating that we have to keep chasing a State agency to recognise our marriage almost two years after we got married.”

It was Revenue’s decision, in 2004, not to recognise the Canadian marriage of Katherine Zappone and Ann Louise Gilligan that paved the way for their landmark case

“It beggars belief that Revenue, with plenty of time to prepare, are still unable to recognise all of these couples as being married,” said Mr O’Sullivan, who pointed out that it was Revenue’s decision, in 2004, not to recognise the Canadian marriage of Katherine Zappone, who is now Minister for Children, and her late wife, Ann Louise Gilligan, that paved the way for their landmark case against the State.

It prompted more than a decade of national discussion, culminating, in 2010, in legislation to allow civil partnerships and, five years year, in the marriage-equality referendum. “Fourteen years since that 2004 decision and Revenue’s ‘system’ still can’t recognise all married same-sex couples,” Mr O’Sullivan said.

“The facility to designate individuals in a same-sex marriage as spouses on Revenue systems is not yet available, but the necessary IT development is planned by Revenue. In the meantime, it is important to emphasise that married same-sex couples are being treated equally for tax purposes.”

Mr O’Sullivan said there seemed to be a “lack of urgency” at Revenue to rectify the situation of couples like him and his husband. He said civil partnerships had fewer legal protections than marriages, and “Revenue’s attitude seems to trivialise” their concerns.

1 Covid-19: One more death and 174 further cases confirmed in State
2 German nudist chases wild boar that stole laptop at Berlin lake
3 Midlands lockdown Q&A: Firstly, is it a lockdown or not?
4 Midlands lockdown: ‘Why shut down Offaly and leave Dublin open?’
5 Inside the dog-trafficking trade: ‘After drugs, it’s guns, then pups’
Real news has value SUBSCRIBE