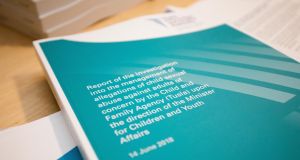 The original report into how Tusla managed allegations of child sexual abuse was published in June 2018. The child and family agency has since been undertaking reforms. Photograph: Tom Honan

There has been “significant progress” on a range of reforms at Tusla, the child and family agency, following a damning 2018 report by the State health watchdog into how the agency handled child sex abuse allegations.

Following a year-long investigation, the Health Information and Quality Authority (Hiqa) found systems failures in Tusla had led to the mishandling of abuse allegations.

The failures arose from a gap between Tusla’s policies and actual practice on the ground and a series of changes.

The final report of an expert group set-up to monitor Tusla’s progress in undertaking these reforms, published on Monday, found the agency had made “significant progress” in addressing previous shortcomings.

Out of 46 actions for improvement, Tusla had completed 10 and a further 31 were on track to be completed. Five actions had been undertaken in part, and no targets were listed as delayed or not achievable, according to the report.

However, the group said it was concerned that current legislation did “not adequately equip Tusla to conduct investigations” into allegations of abuse. It said the problem lies in a lack of legal clarity as to how Tusla must balance the duty to protect children from harm, with the right of the accused to fair procedures.

The experts recommended a greater role for the Garda National Vetting Bureau to fill this gap, as it has a stronger statutory footing in the area.

“Irrespective of the approach eventually taken, challenges to the investigatory aspects of Tusla’s role will persist,” they said.

The report notes that Tusla lacks several powers of investigation open to An Garda Síochána, such as the power to compel a witness to attend an interview or to seize evidence. When investigating an allegation it has to rely on the “cooperation of both the complainant and the person who is the subject of the allegations,” it said.

The main action Tusla can take if it finds an allegation of abuse to be founded is to share the information, the report said.

Another challenge for the agency “lies in increasing the number of social work graduates available to Tusla to tackle unallocated cases,” the report said.

“Despite Tusla’s willingness to recruit more social work graduates, it is restricted to targeting the currently available pool, approximately 215 per annum.”

Another area which had seen a lack of progress was the signing of a data sharing protocol between Tusla and An Garda Síochána.

Minister for Children Katherine Zappone asked Hiqa to investigate concerns about how Tusla dealt with abuse allegations following the mishandling of a false allegation against now-retired Garda Sergeant Maurice McCabe.

Tusla’s chief executive, Bernard Gloster, said he was pleased with progress made over the 18 months following the highly critical Hiqa report.

“We must also be aware of areas where challenges remain and continue to work on these areas which include attracting and retaining staff, managing increasing demands across our services, and rebuilding public confidence,” he said.

Waterford quays developers poised for Government funding decision 21:44
Dáil row over controversial mother and baby home legislation on commission records 21:30
Minister urges objectors to Cork flood relief plan to stop legal action 21:18
Man held after gardaí seize cannabis worth €800,000 in Dublin 21:10
People who throw house parties can be fined €1,000 and jailed for up to a month under new proposals 21:04