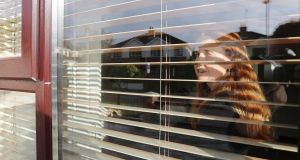 Ulla Quayle at home in Dublin while her guide dog is treated by an animal behaviourist in Offaly. Photograph: Nick Bradshaw

Communities across Dublin are bracing for a surge in illegal fireworks this weekend after an apparent lull in in recent weeks.

From late summer many areas have endured nightly explosions for hours, with reports of injuries, damage to homes and cars and harm to the mental health of vulnerable people and pets.

Among those hoping the pyrotechnics are coming to an end is Ulla Quayle, who is visually impaired and had to send her guide dog, Sage, away from Beaumont, Dublin, six weeks ago due to the trauma of incessant loud bangs.

“Last Halloween she was quite nervous about the fireworks but because it lasted just a week or so, she got over it.

“This year it’s been since August. At first she’d be shaking a lot. She had come into the sitting room for comfort. But then it was almost like she had depression. We couldn’t get her up out of the bed.

“It got to the point in September where we couldn’t get her out to the garden at night for her toilet. She would hold on and hold on because she was afraid to go out.

“Then it got to the stage where, when I wanted to go out, she’d get to the front door and she’d just stop. I couldn’t even get her through the front door.

“It was the cumulative effect, the night after night. Soon every bang started to startle her – car doors slamming, gates slamming, deliveries. It was so upsetting to see this confident, happy, lively little dog just break down.”

Following an assessment by Irish Guide Dogs for the Blind (IGDB), it was agreed Sage should leave Dublin “to try and get her fear down” for two weeks to an IGDB volunteer in Wicklow. She is now with an animal behaviourist in Offaly.

How to have a fun - and safe - Halloween

The Dos and Don'ts for a great night Read now

Ms Quayle, a civil servant, is working from home. She can use a cane for the moment, she says, but she hopes Sage will recover.

“In ways I am lucky I suppose this happened during a pandemic, when I am working from home. But then I don’t think it would have happened at all if it wasn’t for Covid. I think the lockdown made this issue worse, starting earlier and lasting longer.”

While Halloween has always had a lead-in of about a fortnight, local councillors and gardaí have been inundated with reports about fireworks for months.

The closure of services, youth centres and schools as a result of the pandemic saw many young people hanging around with little to do, while cancelled festivals and events through the summer meant a glut of unused fireworks.

Gardaí, in response, initiated its annual Operation Tombola to clamp down on illegal fireworks, in early September, about a month earlier than usual.

The force would not issue statistics on firework seizures, but Sinn Féin councillor Daithí Doolan, who has been liaising with Ballyfermot gardaí, has reports of “significant successes and increased seizures of illegal fireworks”.

He welcomes a “noticeable increase in gardaí in the community on bikes and on foot”.

Residents across Dublin have told The Irish Times they can confirm a relative calm in recent weeks.

Stephen O’Loughlin from Ashtown said: “There has been a huge reduction, and from speaking to friends from Finglas to Castleknock and Blanchardstown, they have also seen it too.”

Doolan believes the publicity surrounding the serious injuries suffered as a result of fireworks – including to Ballyfermot boy Sean Redmond (17), who lost half a finger; and a girl in Ringsend who sustained a “bullet-like” wound to her head, both in September – contributed to “the message getting through . . . I think people are realising the harm illegal fireworks can do to them and their communities.”

He does not expect a “huge surge” in fireworks use over the weekend, but is concerned about house parties. “People will be looking for something to do, a Saturday night.” And he is not confident of a neat end to fireworks from Sunday. “If people have the fireworks to sell, they will want to shift them.”

If they do not stop, Quayle fears Sage will not be able to return.

“She would have to be retired, to be a pet. It would be such a waste because she is very smart. She learns so quickly, very confident and sensitive. She loved working.

“I have lost my mobility aid, but also my pet, and she means so much to me. I miss her terribly. I just can’t believe this has happened.”

The IGDB is asking dog owners to help with research on the impact of fireworks on their pets at guidedogs.ie/halloween-a-dangerous-time-for-animals