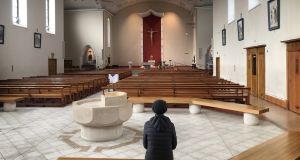 There is to be no change to Level 5 restrictions on public worship, including the Mass, following a meeting between Taoiseach Micheál Martin and Catholic archbishops. Level 5 restrictions however allow for continuing private prayer in churches and other places of worship.

At the meeting, all agreed on the importance of ongoing constructive engagement and solidarity in facing and overcoming the challenges presented by Covid-19.

The Taoiseach thanked the archbishops for their support and acknowledged the major role religious leaders have played in supporting people and giving hope at this time of stress and worry and in reaching out to those who may feel isolated or marginalised.

It was acknowledged that pastoral work continues at parish level even as the celebration of Mass is moved online. The challenges of those suffering bereavement at this time were also acknowledged, particularly entering the month of November, the traditional time for remembering the dead.

On October 8th, the four Catholic archbishops wrote to the Taoiseach requesting a meeting to discuss an easing of restrictions on celebrating public Masses.

According to their statement after the meeting, the Archbishops spoke of “the effect which the current Covid-19 restrictions are having on the health and wellbeing of the faith community and the great desire to return to worship as soon as possible”.

They emphasised they were “fully supportive of the public health messages but highlighted that the coming together in prayer and worship, especially for Mass and the sacraments, is fundamental to Christian tradition and a source of nourishment for the life and wellbeing of whole communities”.

They also stressed “the importance of gathering for worship as a source of consolation and hope at Christmas time” and emphasised efforts by priests and volunteers at parish level “to ensure that gatherings in church are as safe as possible and the consistent messaging from the church about the protection of health and life for all in the community, particularly the vulnerable”.

The archbishops also emphasised the need to protect the most vulnerable in society at this time and acknowledged “the positive value of keeping our schools open, especially for those who may otherwise be educationally disadvantaged by not having access to technology or the daily support of their teachers”.

For his part the Taoiseach outlined the reasoning behind the Government’s plan for living with Covid-19 and the need to strike the right balance between all forms of social and economic activity and public health.