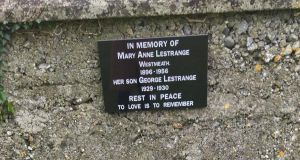 Plaque for Mary Ann Lestrange and her son George who died in Tuam mother and baby home in 1930. Photograph: Angela Lally

Angela Lally was 11 years-old when she first heard about her grandmother’s sister Mary Ann Lestrange and her baby George. As she grew older, she developed an interest in genealogy and started investigating the lives of her grand-aunt and cousin. She uncovered a tragic story of loss and separation which has become all too familiar to many families dotted across this island.

George, who was born on September 4th, 1929, spent the first 7½ months of his life in the Tuam mother-and-baby home with Lestrange. On March 9th, 1930, according to his death certificate, George died. Two weeks later his mother was discharged from the home but rejected by her community.

Nine decades on, the family still believe baby George may have been illegally adopted. “My mother said he was sent to America so I always assumed he was there.”

Her grandmother never spoke of her sister but always carried her photograph. “She was my grandmother’s older sister and they worked together in Galway. She was a bridesmaid at my grandmother’s wedding and godmother to her first child. But it just fell apart for her. She was ostracised and lost her son.”

Lally later discovered Lestrange spent her final years at a county home in Loughrea, where she was buried in an unmarked grave. “I can’t get over the pain and suffering she must have gone through on her own.”

She has filed a missing person’s report for George and believes he may be the oldest missing person in the history of the State. After making contact with the Tuam Mother and Baby Home Alliance, Lally visited the burial site, an experience she found deeply upsetting.

“I don’t know if he died or what he died from but I don’t want him in the Tuam tanks. I’d like him to be brought home to the family plot.”

Shortly before Christmas the family erected a plaque in Loughrea in memory of Lestrange and her son. Lally says the Government should push ahead with the proposed DNA scheme so that families can have “justice and closure”.

“To have him identified and brought home would mean the world to us. It would bring closure to a family ripped apart. I’d ask the Government not to postpone this or put it on the back burner. There are lots of people waiting for answers.”