Late bishop admitted to one of the allegations, two other women given compensation 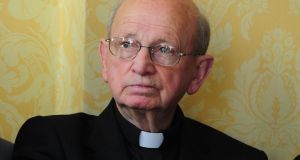 Three women made allegations that they were sexually abused as children by former Bishop of Galway the late Eamonn Casey and two have received compensation as a result.

In one of the cases, Bishop Casey, who died in March 2017 aged 89, alerted Church authorities to an historic allegation of abuse when he was serving as a priest up to 2005 in the south England diocese of Arundel and Brighton.*

Speaking then to the English diocese’s child protection officer Fr Kieran O’Brien, according to a diocesan document, Bishop Casey said “that there was another historical case dealt with by his solicitors in Dublin.

“Name of alleged victim was (redacted). She made a claim through the Residential Institutions Redress Board and was awarded compensation,” according to a diocesan document.

Bishop Casey made the admission in the context of another allegation of child abuse made against him by his niece Patricia Donovan a short time beforehand in November 2005.

On Monday evening, a spokesman for Limerick’s Catholic diocese confirmed that it was “aware” of the three complaints dating back to the 1950s and 1960s against Bishop Casey, who was ordained in Limerick in 1951 and moved to the UK in 1960. The Garda Síochána and the Church authorities were notified by the Limerick diocese after the complaints were made in 2001, another in 2005 and the third in 2014.

One of the complaints was subsequently dealt with by the Residential Institutions Redress Board, which handled all claims from people maltreated in orphanages, industrial schools or reformatories.

A settlement was made in the second case after his death in 2017 after a woman had begun a High Court action over alleged abuse when Bishop Casey served as a curate in St John’s Cathedral in Limerick from 1955 to 1960,

The Irish Mail on Sunday carried an extensive interview with Ms Donovan who repeated her allegations against Bishop Casey in 2005, which were investigated by the gardaí. No charges were brought by the DPP.

Speaking at the time to The Irish Times, Bishop Casey said he was “utterly amazed” to be told by gardaí on August 28th 2005 that there would be no charges, since he had been interviewed just three weeks before.

“I thought it would take another five or six months at least,” he declared. Gardaí had questioned him for six hours on foot of the 13 allegations made, he said.

Until last Sunday’s article, which also carried a statement from Limerick diocese on the three women making allegations, it was not known that Bishop Casey faced child abuse allegations by two other women.

* This article was amended on January 23rd 2020 to note that Bishop Casey did not admit to abuse, rather he alerted Church authorities to the historic allegation