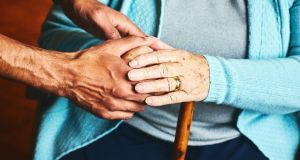 A family carer can nominate two people who will step into their caring role in the event of an emergency. Photograph: iStock

Cared-for vulnerable people will be looked after if their family carer experiences an unexpected illness or accident, under a new scheme being launched on Monday.

When a family carer has an unplanned hospital admission there is a risk that the person who needs their care and support could be left at home alone and uncared for, Family Carers Ireland (FCI) has said.

In light of this, Taoiseach Micheál Martin on Monday launched the “emergency card scheme”, which intends to give peace of mind to family carers , as well as ensuring that the person they care for remains safe during emergencies.

Under the scheme, the family carer completes an FCI emergency care plan, outlining the care needs, medication requirements, likes and dislikes of the person for whom they care.

The completed emergency care plan is sent to FCI and family carer receives their emergency card which includes a freephone emergency helpline, and which they are to carry at all times.

In the event of an emergency, and where a person’s named emergency contacts are unavailable, FCI will determine the person’s needs and mobilise either a “red response” or a “green response”.

During a red response, which is for a person who needs a high level of support, a member of An Garda Síochána will visit the person and decide if the person requires transportation to the emergency department as a place of safety.

In a green response, a pair of volunteers from either the national ambulance service community first responder schemes, the Irish Red Cross or the Order of Malta will sit with, and support the person until a home care package can be organised.

The scheme is funded by Irish Life and with the support of the Dormant Account fund administered by Pobal, a not-for-profit which manages programmes on behalf of the Government.

Catherine Cox, a spokeswoman for FCI, said the pandemic has “really highlighted the need” for the scheme.

“Family carers often worry about what will happen to the person they care for, in the event that they, the family carer, are involved in an accident or emergency,” Ms Cox said. “This has never been more important than in our current times.”

Moira Skelly was the first one to sign up for the scheme. She cares for her daughter Ciara (25), who requires 24-hour care and receives her daily nutrition through a PEG-tube and has a permanent catheter.

“This card and scheme addresses one of our greatest fears as a family – we constantly worry about what will happen to Ciara if anything happened to me or Paul – this gives us great peace of mind knowing that there is a plan in place particularly for those first crucial hours should such an emergency take place,” she said.