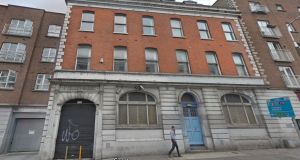 All the existing buildings on the St Peter’s Bakery site are planned for demolition, except the early 20th century offices which face on to Parnell Street. Image: Google Maps

Plans for five blocks of student accommodation up to eight storeys high on Dublin’s Parnell Street are facing opposition over the partial demolition of the old St Peter’s Bakery.

SP Bakery Ltd intends to apply to An Bord Pleanála for fast-track planning permission for the complex for 257 students at the east end of Parnell Street, close to the junction with Gardiner Street and opposite the 491-bed Kavanagh Court student scheme.

Under the Strategic Housing Development system applications for schemes of more than 100 homes, or blocks of 200 student bed spaces, are made directly to the board, bypassing the local authority decision phase.

The board has given the company leave to apply for permission using this fast-track system.

The apartments would be built in blocks ranging from four storeys at Parnell Street to eight storeys at the northern perimeter of the site close to Temple Lane. All the existing buildings on site are planned for demolition, except the early 20th century offices of St Peter’s Bakery which face on to Parnell Street.

The applicants plan to renovate the bakery office building, a protected structure designed by Charles Herbert Ashworth and built by prolific Dublin builder CJ Crampton in about 1906. However, according to their conservation architect, the old bakery factory buildings behind it are not of any “particular importance” and “their replacement is not of particular conservation concern”.

However, Dublin city councillors said the industrial bakery, as well as the street-front offices, are protected structures that should be demolished only in “exceptional circumstances”, which had not been demonstrated by the applicant.

Fine Gael councillor Ray McAdam said the presumption that only the front office building was listed for preservation was wrong.

“The entire site is protected,” he said, “one could argue that the industrial bakery buildings are protected and that the Edwardian office building is within the curtilage of same, rather than the other way around.”

The industrial buildings were “impressive and handsome” and should be “entirely retained as rare examples of their kind in the northeast inner city”, he said. The application was “fatally flawed”, Mr McAdam said.

“It is my strong view that An Bord Pleanála not grant planning permission for development as sought.”

Independent councillor Mannix Flynn said it was an “appalling” plan.

“This is absolute vandalism and destruction of a unique part of the city and a unique heritage site.”

Councillors have also raised concerns about the height of the complex which they said would dominate existing apartments.

St Peter’s Bakery, named after the patron saint of bakers, was built as part of an enlargement of the Kennedy Bakery complex on Parnell Street.

Peter Kennedy was listed as a “fancy baker” as early as the mid-1850s on what was then Great Britain Street and later became Parnell Street.

The Kennedy’s business continued on Parnell Street for more than 100 years until the closure of the bakery in 1972.

Con Colbert, who was executed for his part in the 1916 Rising, worked as a clerk in the bakery.