Higgins: Moral question of how Irish treat immigrants must be a concern

President made comments while speaking at ceremony honouring 12 Irish emigrants 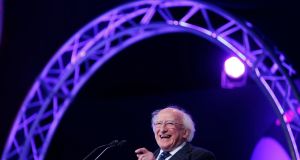 President Michael D Higgins: ‘We more than most should be deeply aware of our moral obligation to welcome those fleeing poverty, famine, persecution, war or natural disaster.’ Photograph: Nick Bradshaw/The Irish Times

Irish people should be more “deeply aware” than others of the moral obligation to welcome those fleeing persecution because of our own history with emigration, President Michael D Higgins has said.

“The moral question of how we treat ‘the other’, ‘the stranger’ as arrival on our shores, or minority within our community, must be a central concern for all sections of society,” he said.

President Higgins was speaking at a ceremony honouring 12 Irish emigrants who had made particular social contributions in their adopted countries.

He used the occasion as a reminder of Ireland’s history with emigration, which he said seen had 10 million people leave since the 18th century.

“We more than most should be deeply aware of our moral obligation to welcome those fleeing poverty, famine, persecution, war or natural disaster,” he said, at a reception for recipients of the 2019 Presidential Distinguished Service Award in Áras an Uachtaráin on Thursday evening.

People were honoured across six specific fields. The recipients included UK-based astrophysicist Prof Jocelyn Bell Burnell, and Dr William Howlett who has worked in neurology in Africa, in the field of Science and Technology and Innovation.

In Arts, Culture and Sport, the awards were presented to the Spanish based historian Ian Gibson and, together, theatre producers Charlotte Moore and Ciarán O’Reilly in New York.

For Business and Education, the UK-based businessman Paul Drechsler who has helped the educationally disadvantaged; and both Michael Kenneally and Rhona Richman Kenneally, founders of the School of Irish Studies at Concordia University in Montreal, Canada, were honoured.

Jackie Donohoe from the US was recognised for her campaigning after the death of six Irish J1 students following the collapse of a balcony in Berkeley, California in 2015, including her own daughter Ashley and niece Olivia.

“Despite her personal grief, [Ms Donohoe] has worked tirelessly to ensure that such a tragedy would not befall any other family in California,” President Higgins said.

In a posthumous honour, an emotional President Higgins recalled his friend and leading figure in the Trócaire charity Sally O’Neill Sánchez whom he said had worked to “combat poverty, injustice [and] human rights violations”.

Nominations for the awards are sought through the Irish embassy network and those honoured have to live abroad, and typically have contributed to Ireland and its international reputation, or to Irish communities abroad.

1 Covid-19: One more death and 174 further cases confirmed in State
2 German nudist chases wild boar that stole laptop at Berlin lake
3 Midlands lockdown Q&A: Firstly, is it a lockdown or not?
4 Garda checkpoints in Kildare, Laois and Offaly as restrictions come into force
5 Midlands lockdown: ‘Why shut down Offaly and leave Dublin open?’
Real news has value SUBSCRIBE