Death of woman from sepsis examined by three separate inquiries 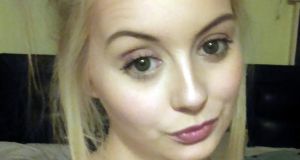 Karen McEvoy (24), from Tallaght, who died in Naas General Hospital of suspected sepsis on Christmas day 2018, one week after giving birth in the Coombe hospital.

Three separate investigations are now under way into the death of Karen McEvoy (24), a mother of three suspected of dying of sepsis a week after giving birth at the Coombe Hospital.

Ms McEvoy, originally from Tallaght, died on Christmas Day in the emergency department of Naas General Hospital. She had developed flu-like symptoms, sweating and severe pelvic and back pain within 72 hours of giving birth to a baby girl on December 18th.

Her partner Barry Kelly (26) said that when she attended for a postnatal appointment on December 21st at a primary care centre in Naas, and at the emergency department in the Coombe on December 23rd, no blood samples were taken. She attended the Coombe on crutches as walking had become so difficult and was told she may have sciatica and to call Tallaght hospital for an X-ray if her symptoms got worse.

On Christmas morning, when she woke at her home in Co Kildare just outside Blessington, her limbs and face were swollen, her speech was slurred and her breathing laboured. She was taken by ambulance to Naas hospital. During attempts to intubate her to help her breathing she went into cardiac arrest and died.

On Wednesday, Kildare County Coroner, Dr Denis Cusack, who will hold an inquest into Ms McEvoy’s death, confirmed to Mr Kelly the preliminary postmortem finding was that his partner had died of “multiorgan failure with septicaemia”.

While the Coombe is conducting its own investigation, Mr Kelly has called for an independent external inquiry.

In a statement on Thursday a spokeswoman for Minister for Health Simon Harris said he had “been made aware of a tragic event that occurred on 25th December last. While the Minister is unable to comment on individual cases, he wants to extend his thoughts and sympathies to the family on their loss,” the statement said.

“The HSE has advised the Department of Health a full external review is to be carried out and procedures are currently being put in place for the review.”

Detailing the nature of its inquiry, the HSE said “a Serious Incident Management Team (SIMT) will oversee a review into the circumstances of Ms McEvoy’s tragic death. In this regard, an appointed review team, independent of the hospitals, will examine the care provided to Ms McEvoy and the terms of reference for this review have been shared with Mr Kelly through his solicitor”.

“There appear to be serious questions to be answered about the operation of sepsis protocols and the adherence to clinical guidelines,” she said. “It also appears that the family in this case are very isolated. It all comes back to the question of trusting women around what they are saying about their own health.”

In 2014, two years after the death of Savita Halappanavar at Galway University Hospital, a national system to detect life-threatening illnesses in pregnancy, known as the Irish Maternity Early Warning Score (IMEWS), was introduced.

According to the Minister’s spokeswoman the number of sepsis-associated hospital deaths has fallen by more than 20 per cent since 2014.