Families of women who died in childbirth left in the dark, says midwife

Partner of Karen McEvoy, who died on Christmas Day, not given ‘any information’ 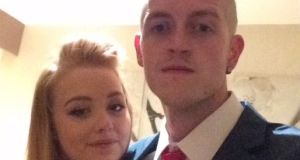 Karen McEvoy, who died a week after giving birth in the Coombe hospital, and Barry Kelly. Neither Mr Kelly nor his solicitor, Niamh O’Brien, has been provided with an interim postmortem result, a death certificate or any of Ms McEvoy’s medical notes.

Partners and families left grieving after the death of a woman during or soon after childbirth must be given information about what happened as soon as possible, a senior midwife has warned.

Jo Murphy-Lawless, adjunct professor at the school of midwifery in Trinity College Dublin, said she was “raging” after the death of Karen McEvoy (24) from Blessington, Co Kildare who died on Christmas day a week after she had given birth at the Coombe.

“And I cannot believe her poor partner, who has been left with three small children, has not been given any information about what happened.”

Neither Barry Kelly nor his solicitor, Niamh O’Brien, has been provided with an interim postmortem result, a death certificate or any of Ms McEvoy’s medical notes.

Nor have they been told the terms of reference for an inquiry they understand is under way in the Coombe hospital, where she gave birth.

The mother of three children aged three, one and one month died in Naas General Hospital of suspected sepsis. She had given birth to a girl at the Coombe on December 18th.

Mr Kelly says that though she was displaying symptoms including sweats, flu-like symptoms, difficulty breathing and severe abdominal and back pain, no blood samples were taken after she was discharged from the Coombe at either a postnatal appointment at a primary care clinic in Naas on December 21st or during a visit to the Coombe on December 23rd.

She was brought to Naas hospital by ambulance on Christmas day and died of cardiac arrest while medical staff attempted to intubate her to help her breathe.

Sean Rowlette, widower of Sally Rowlette, who died at Sligo general hospital on February 5th, 2013, a day after she gave birth, told The Irish Times on Tuesday he couldn’t stop thinking about Mr Kelly.

Ms Rowlette had suffered from HELLP syndrome, a severe form of pre-eclampsia.

“We had to fight to get answers,” said Mr Rowlette. “I remember leaving that hospital in February with a new baby. I had never even made a bottle before. I got no answers until October when the hospital called me to a meeting. They told me they had done everything they could for Sally.”

A jury at her inquest in 2014 returned a verdict of death by misadventure.

Solicitor Caoimhe Haughey, who represented Alan Thawley, the widower of Malak Thawley (36), who died during surgery for an ectopic pregnancy at the National Maternity Hospital in May 2016, said the “default position of the HSE in a maternal death is to delay, deny and defend”. She described as “appalling” that Mr Kelly has not yet been provided with Karen’s medical notes or a preliminary postmortem result.

Independents 4 Change TD Clare Daly said Ms McEvoy’s death was “utterly heartbreaking” almost two years after former minister for justice Frances Fitzgerald had promised there would be a Coroners Bill to provide for mandatory, open disclosure to families and partners following a maternal death, and for mandatory inquests into maternal deaths.

“With the news that Karen’s partner is having difficulties getting the postmortem results, the Minister needs to ensure the HSE is held to account,” said Ms Daly.

A HSE spokeswoman, on behalf of the Coombe, the Naas primary care clinic and the HSE, said no comment could be provided on Ms McEvoy’s death.