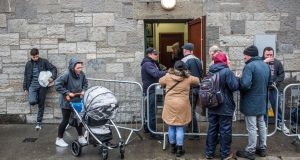 Many people arrived at the Capuchin Day Centre in Smithfield to collect Christmas parcels of food. Photograph: James Forde/ The Irish Times

Almost 3,000 Christmas food parcels, with basics like tea, cheese, cold meats and biscuits, were provided to some of the poorest and most vulnerable Dubliners at the Capuchin Day Centre on Friday.

The centre, on Bow Street, gives out about 1,800 weekly parcels every Wednesday but people come in bigger numbers for the Christmas parcels which provide a little more - including Bird’s packet trifle and chocolate.

Doors open at 8 am, avoiding long queues that had gathered in past years when they opened an hour later. Numbers on Friday were constant, of young, middle-aged and elderly men and women, couples, parents with children and mothers in groups pushing buggies. About half seemed, from their speech, to be Irish and half from outside Ireland.

Most arrived on foot, some on bikes and a small number by car, with numbers rising with every Luas that stopped at the nearby Smithfield stop. Among them was Michael McCabe (40) from “off Parnell Street” who cares for his mother.

“I do try get up here every Wednesday for the food bags because they are a great help. We’re only on social welfare. I can’t work because I do look after my mam. It can be a bit mad trying to survive, trying to get the groceries and pay the bills.”

Asked what he will be doing on Christmas day he says a cousin, who is homeless, will come to them for dinner. “I do feel sorry for the people who are sleeping on the streets. I feel lucky really.”

Barbara McGrath was collecting her Christmas parcel with the older two of her three daughters, aged 9, 12 and 15. The family has been homeless since April, having had to leave her sister’s house due to overcrowding. They spent the first fortnight in night-to-night accommodation, where they had to check into to new B&B or hotel each night. They are now in a family hub in Glasnevin.

“The food parcels are very good in our situation, which is awful,” says Ms McGrath. Asked how being homeless is her oldest daughter replies: “Bad. It’s very hard getting to school. We used to live just across the road and now we have to get a bus and we’re late sometimes”.

An older woman, dressed smartly and from Bulgaria, says the parcels are a help, “especially at Christmas” before becoming upset.

A number of middle-aged and older men say they live alone and will spend Christmas alone. Joseph (52) who did want to give his surname, used to work in construction but “did two discs in” in 2000. “I haven’t worked since. I have a grown-up son but he is in prison so I’ll be in the house. I’ll be fine. I have a corpo house. It needs a lot of work but getting anything done is another story.”

Gregory (54) also doesn’t want to give his surname. “I live in a flat in Islandbridge. I used to work in security and catering but I’m on disability due to an injury. I’m coming here years. I’ll be on my own . I have two sons, they’re adults, and I’ll meet up with them over the Christmas.”

Joe Dunne (62) described himself as a “poor farmer” who comes from Portlaoise most Wednesdays for a food parcel, using his free-travel pass. “I live alone but I have a sister I go to for Christmas, near Newlands Cross.”

Inside Fr Sean Donohoe was among those greeting people, “Happy Christmas” before inviting them to take two bags - one with dry non-perishables and another with meat, cheese and butter. All smiled back, thanking the volunteers and staff and wishing them ‘Happy Christmas’”.

“We were packing for about five hours last night and for about an hour and half this morning, from 6.30,” says Fr Donohoe. “We open the doors at 8 am. The numbers are growing every year for the past five years. Everyone and anyone come, and all are welcome.

“We can do this because of the generosity of people. This is about more than food. It’s about friendship, respect and support.”

The centre will open on Christmas Eve, providing about 300 parcels of baby formula and nappies, a breakfast and lunch, and close at 4 pm, reopening on St Stephen’s Day at 7am for breakfast.