Working in Michelin star kitchens, from Provence to Belfast

Pastry chef Gráinne Mullins is working in Ox Belfast, after two years in Dan B in France 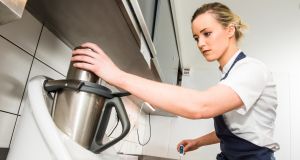 Gráinne Mullins is back in Ireland after two years in Provence, where she worked as a pastry chef in Michelin-starred Dan B. She is now working in another Michelin-starred restaurant, OX Belfast. Kitchens are a "universal working environment", she says, but she did spot some differences between the two countries.

Tell us about your career so far.

I have been working as a chef in kitchens for the past eight years. Two of those years I spent abroad, in a restaurant in Provence in the south of France, working as chef pâtissier (pastry chef). I can now reflect on the on the differences between the time I spent working in France in Dan B (danb.fr/en/danb/), and in kitchens in Ireland.

France is a country so proud of its food heritage. French chefs embrace all of their local produce, and although Ireland does not have the same climate, we have an amazing bounty of local fish, vegetables, fruit and meat from land and sea that we could be more proud of.

What do you feel passionate about as a chef?

In recent years there has been a big change towards buying local, but I believe we should be using even more locally grown produce. The restaurant I currently work in, OX Belfast (oxbelfast.com) is the perfect example of a food establishment that embraces produce that is in season, and uses what is locally produced. We chefs go and pick the fruit, vegetables and herbs from a local farm ourselves. We also receive deliveries from locals who have food surplus to their own needs, and this all goes onto the ever-changing menu.

Kitchens are adrenaline-fuelled creative spaces where the chefs push and push to always do better. The intensity of work is similar in any Michelin-starred restaurant, but I found French kitchens very competitive. Cheffing is a highly respected profession there. People in France understand the work involved in running a restaurant, and applaud chefs for what they create. I wish people in Ireland would recognise the work and passion that goes into being a chef.

Are the Irish now a race of foodie fusspots?

I have found since coming back to work as a chef in Ireland that the amount of changes requested by customers as orders are being taken has increased dramatically. I understand that people have different tastes, and likes and dislikes, but for me, eating in a fine dining restaurant is about experiencing something new, and enjoying the adventure of the meal. Removing the element that you don't like from the dish can often take away from the “created meal” experience. Chefs have carefully designed the dish for a balance of flavours and textures, and when one element is removed, it can throw the whole meal off balance. Being adventurous is what is impressed me about the French palette. How trés sophisticated.

What could Irish restaurants learn from the French?

The lack of young chefs coming into the industry affects both Ireland and France. Escoffier’s Kitchen Brigade system is at the core of how every kitchen in the world works. From head chef down to commis chef, every role is as important as the next, and in France they have the fantastic apprenticeship programme where teenagers can get straight into a kitchen environment and get hands-on experience from the get go. I believe Ireland would really benefit from a similar programme, newly graduated chefs often find themselves overwhelmed once they step into a professional kitchen. I’m not saying the long hours or the work is easy, but finding people who are passionate enough to keep this industry alive is becoming a constant struggle.

As an island, Ireland is home to such fantastic native foods, and we should embrace our roots; even if traditional Irish food is not as well known as the classical French cuisine, it can definitely compare in taste.

I am proud to see our food industry growing year after year, with new additions to the Michelin guide. We have a lot to be proud of for a small country. So let’s make the most of what we have.

What Irish foods did you miss while in France?

Dairy products: We are incredible lucky to have such fantastic milk in Ireland. The difference can definitely be tasted when used in dishes. The butter here is amazing!

The fry up: For an Irish person, nothing compares to the fry; breakfast is just not the same anywhere else in the world.

Potatoes: Never the same as at home.

Chef Ketchup: I know that’s a controversial one.

What French foods do you miss now you're back in Belfast?

Cheese: The fantastic selection of cheeses in France is hard to beat

Fruit and Veg: Being able to grow them just outside your front door with relative ease is something the climate completely lends itself to.

Vienoisserie: The French know how to do a sweet breakfast.

Olive oil: Something I learned to appreciate and love while in the south.

If you work in an interesting career abroad and would like to share your experience with Irish Times Abroad readers, email abroad@irishtimes.com with a few lines about you and what you do.