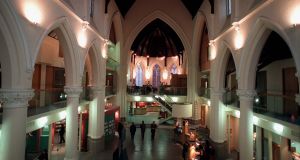 St Andrews Church, the former headquarters of Dublin Tourism, will be home to a new food market with 15 outlets serving up to 400 diners.

A Continental style food hall, with 15 outlets serving up to 400 diners, is to open in Dublin city centre next summer, following a €6 million fit-out and renovation of St Andrew’s Church on the corner of Suffolk Street and St Andrew’s Street.

The Michael JF Wright Hospitality Group, which employs 700 people at its eight Dublin bars and restaurants and Marqette airport outlets, has taken a 25-year lease on the building, which operated as a tourist office until four years ago. Construction will get under way in January and the venture is expected to begin trading in June. The opening hours will be 8am to 11pm, seven days a week.

“The idea is to create an indoor urban food hall for the city centre; a new casual dining experience with emphasis on great food, social interaction and entertainment,” says Michael Wright. “I had visited food halls all over Europe and the US and had seen how popular and atmospheric they were. Irish hospitality and the Irish welcome are legendary; eating, drinking and entertainment are at the heart of this, and to me it made complete sense that Dublin should have one.”

There will be 10 food vendors operating from the main body of the church, and a further three dessert and patisserie outlets, two coffee kiosks and two bars. Communal seating will occupy the central aisle of the church, with additional tables for smaller groups on the first floor. The former parochial hall behind the church will be linked to the main structure by an enclosed walkway “wrapped in black zinc”, and will accommodate an additional 100 diners. Further seating will be available in an outdoor garden setting.

According to Ewan McDonald, chief operating officer for Michael Wright Hospitality, the group is in advanced negotiations with a selection of high-profile operators on the Dublin dining scene including John Farrell, whose restaurants include Luna, 777 and Butcher Grill; Niall Sabongi (The Seafood Café, Klaw, Klaw Poke) and Shane Mitchell (Asador).

“We want to add something very different to the Dublin food scene,” says McDonald. The project is inspired by food markets such as Time Out in Lisbon, Borough in London and Mackie Mayor in Manchester.

A strategic mix of high quality vendors is seen as pivotal to the success of the project. “Our concept is to bring the best of Irish artisan food to this location. Really high quality Irish food and Irish ingredients, but with a global flavour. Hopefully, this will translate into a really great choice of foods – something to suit all palates, from traditional Irish dishes, to Korean delicacies, to the latest in vegan offerings. The mix is central to the success of the food hall,” says Wright.

The venture will also incorporate what Ewan McDonald describes as “a rotational kitchen, where guest chefs can take up 12-week residencies, to showcase new talent and add variety for regular customers”.

A stage will be built to facilitate cookery demonstrations. There will also be regular musical and theatre performances, and according to Wright the venue is expected to operate as a cultural space as well as a dining venue. “Really good food halls are not just about the food – you have to understand the social and experiential aspects of this type of meeting place – the atmosphere and interactions of vendors and customers is critical. The atmosphere of a food hall is completely different to that experienced in a restaurant and to create this, you need the perfect space, the perfect building in a great location.”

There will be two full bars in the venue, as well as a variety of wines on tap at the food outlets. However, McDonald says the operator is “not looking to be a super-pub” and there are “no plans to trade late”. Diners will be able to order food and take it away, and there will be a buzzer system in place for dishes that take longer to prepare. Table service will be available for drinks orders.

The cut-stone building which dates from 1860, is in good structural order, and the site extends to almost 20,000 sq ft. According to Wright, the finished project will be contemporary in style, and “sensitive to the fabric of the building and its environs, with as little interference with the existing architecture as possible”.

Vendors will pay “rent calculated as a negotiated percentage of turnover”, and the premises will be maintained by the Wright group. “Negotiations with three operators are advanced and at contract stage, but 70 per cent is still available,” Ewan McDonald says.