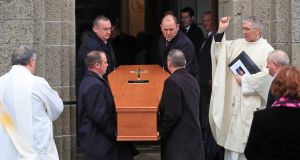 The remains of Frank Murray are carried from the Church of Our Lady of Perpetual Succour, Foxrock, after his funeral Mass. Photograph: Colin Keegan, Collins Dublin.

In a career spanning six decades public servant Frank Murray worked for seven taoisigh and three presidents of Ireland, his funeral Mass was told on Friday. He also worked for two future taoisigh and President Michael D Higgins at earlier stages in their careers.

Mr Murray (76), who died suddenly at his home in Dublin last Saturday, had also been co-commissioner of the Independent Commission for the Location of Victims’ Remains (ICLVR) for more than a decade.

Mr Murray began his career with the Civil Service in 1960 and was appointed as secretary general to the government in 1993.

Speaking at the end of the funeral Mass at the Church of Our Lady of Perpetual Succour, Foxrock, Paul Murray recalled how his father had “worked with Taoisigh and presidents including Liam Cosgrave, Jack Lynch, Charles Haughey, Garret FitzGerald, John Bruton, Albert Reynolds, Bertie Ahern, Patrick Hillery, Mary Robinson, Mary McAleese. And with Brian Cowen, Enda Kenny, and Michael D Higgins at earlier stages in their careers.”

His father “loved his job and he considered himself fortunate to have a role where he could combine interesting work, making a difference, and serving his country”.

He was “the consummate professional, discreet, modest and disciplined. The story was never, ever about him. So it comes as no surprise to hear that there are no Murray memoirs. And there is no posthumous book deal. All that he knew he has taken with him. For some of you, I know this may be a disappointment but I am sure there are others for whom it is a relief.”

In retirement his work with the ICLVR “was always uppermost in his mind. He was completely committed to locating the remains of the 16 Disappeared so that they too could be returned to their families.

“Locating 13 of the bodies gave him enormous personal fulfilment. Let us hope and pray that the remaining three are found soon. I’m pretty sure he is working on that now.”

He was “a proud Leitrim man and always kept in touch with family and friends in Carrick-on-Shannon. He loved it when any of us visited the town.”

“Finally, we were very proud when we heard president Mary McAleese, another Leitrim devotee, say that Ireland had lost a great Irishman last weekend. We have lost a great husband, father, grandfather and friend and we will miss him terribly.”

The first of the Prayers of the Faithful, read by Murray children and grandchildren read: “we pray for all of the Disappeared especially Joe Lynskey, Columba McVeigh and Robert Nairac. May they be found and given the Christian burial that they deserved.”

Welcoming everybody, as the rain fell heavily outside, Mass celebrant and Murray family friend Fr Arthur O’Neill noted how “the weather matches the mood in many ways”.

He recalled how Frank Murray was “quiet and unostentatious in his conviction that the gospel of love, the gospel of Jesus Christ was good news. He knew it wasn’t fake news”. He was “a man whose lifestyle reflected his faith in the God of love”.

Fr O’Neill was assisted by Fr Paul Turley of the Redemptorists’ Clonard monastery in Belfast, and former government secretary Rev Dermot McCarthy. Rev McCarthy, now a permanent deacon of the Catholic Church in Dublin, read the gospel and said the final prayers over his friend and former colleague.