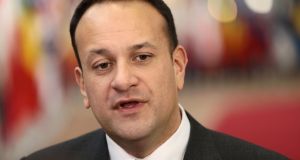 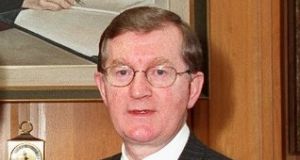 Frank Murray had a distringuished career in the Civil Service which he joined in 1960. Photograph: Maxwells

Frank Murray, one of the commissioners who worked to establish the burial of the Disappeared, was an exceptional public servant, the Taoiseach has said.

Leo Varadkar was leading the tributes to Mr Murray, who died suddenly on Saturday.

He said: “Frank Murray was an exceptional public servant. He enjoyed a long and distinguished career in the Civil Service and I want to acknowledge his many years of loyal service to many governments.

“In particular, I also want to acknowledge the professionalism and sensitivity he brought to his work over the past number of years at the Independent Commission.

“He was also a proud Leitrim man who never forgot his roots.”

Mr Murray was in his late 70s and had been co-commissioner of the Independent Commission for the Location of Victims’ Remains (ICLVR) for more than a decade.

Minister for Justice Charlie Flanagan described him as a good friend and gentleman.

He said: “In all of his work Frank was a consummate professional and a perfect gentleman. He has truly done this State some service.”

The ICLVR was set up to find the remains of people abducted, murdered and secretly buried by republicans during the Troubles.

The remains of three victims have yet to be found.

Mr Murray began his career with the Civil Service in 1960 and was appointed as secretary general to the Government in 1993 - holding the key position during the crucial period which led to the signing of the 1998 Good Friday Agreement that ended decades of sectarian violence in Northern Ireland.

After his retirement in 2000 he held a number of board level positions with the Public Appointments Service, the Military Heritage of Ireland Trust, the Parnell Society and the Institute of Public Administration (IPA).

He served on the ICLVR alongisde Sir Ken Bloomfield, who said Ireland had lost a “great man”.

Sir Ken said: “His distinguished career in the Irish Civil Service was in itself notable but in our joint efforts to recover remains he did his utmost to ensure a Christian burial, however belated, for many grieving relatives.

“It has been a privilege to know and work with him.

“He will be greatly missed by all who benefited from his wisdom and unalloyed decency.”

Last week Mr Murray attended a special service for the relatives of the Disappeared in St Patrick’s Cathedral, Armagh.

Sandra Peake from the Wave Trauma Centre, which works to support the relatives, said they had been shocked and saddened by his death.

“His calm compassion and quiet determination to see it through even or perhaps especially when a search had been unsuccessful gave the families comfort and reassurance that they would not be abandoned.

“He will be missed and will not be forgotten.” - PA

1 Three relatives dead after apparent murder-suicide in Kanturk, Co Cork
2 Gardaí not seeking anyone else in relation to Cork shooting deaths
3 Woman stranded in Ireland due to pandemic has ‘miracle baby’
4 Cork suspected murder-suicide may have been over disputed will
5 Gardaí say 52 people who went missing in 2020 not yet found
Real news has value SUBSCRIBE