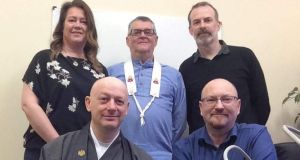 A new Irish Buddhist Union (IBU) has been formed to represent the faith in Ireland. An umbrella association of five Buddhist groups and organisations in the State, it intends bringing Buddhist ideas and principles to the attention of wider Irish society.

Buddhism is among the fastest growing faiths in Ireland, showing a 12.1 per cent increase, to 9,758, from the previous census in 2011.

Apart from the growth of interest in Buddhist meditation techniques, especially “mindfulness” in recent years, Buddhism as a faith tradition has also seen a generation of Irish-born Buddhist teachers and leaders coming to the fore for the first time.

In an increasingly diverse Ireland, the IBU hopes that the many Irish people who identify as Buddhist will become visible and active in Irish public life, with the IBU acting as a conduit for this.

It also hopes to have an input on the national debate as Ireland develops to accommodate its growing diversity for the first time.