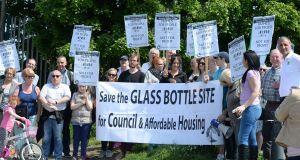 Plans to build almost 1,000 social and affordable homes at the Glass Bottle site on Dublin’s Poolbeg peninsula have been appealed by the site’s receivers, despite the State owning a large stake in the land.

An Bord Pleanála will later this month open a public hearing on Dublin City Council’s plans for fast-track development of up to 3,500 apartments in a new Strategic Development Zone (SDZ)at Poolbeg.

Last May the council said it had reached a deal with then Minister for Environment Simon Coveney, Nama and receivers, that State funding would be made available to bring the number of social and affordable homes in Poolbeg to 900.

However, receiver Deloitte is now appealing the inclusion of any more than 10 per cent social housing, or a maximum of 350 homes, in the provisions of the SDZ scheme.

The council has been preparing plans for the new urban quarter on the peninsula, since it received Cabinet approval for the project in May 2016.

All of the 3,500 apartments, designed to house some 8,000 people, would be built on the former Irish Glass Bottle Company lands and the smaller neighbouring Fabrizia site, which combined cover about 15 hectares. Both sites are in receivership with Deloitte, but the city council owns around one quarter of the Glass Bottle site.

Under the planning Acts, housebuilders must provide 10 per cent of any scheme of 10 homes or more for social housing. However, city councillors had sought a much higher percentage of social housing for the area, with some calling for up to 50 per cent of new homes to be made available for people on the housing waiting list.

Deloitte has appealed this provision to the board, saying the council had “no legal basis” to require the receiver to provide more than 10 per cent social housing under the SDZ scheme and to do so would have “serious potential consequences” for the value of future development.

The receiver is also seeking increases in height, of approximately two storeys across the site, otherwise it said the maximum number of 3,500 apartments could not be achieved.

The SDZ comes to 34 hectares, and most of the remaining lands not occupied by the Glass Bottle/Fabrizia site are owned by Dublin Port Company. It plans to retain its lands for port use.

However, the promoters of a plan to use eight hectares of port lands for an €80 million studio complex have also appealed the SDZ scheme to the board.

The SDZ states the land in question could be used for “film, TV and digital content production studios”. However, Dublin Bay Studios has argued the land should be specifically zoned for the development of a film studio.

The hearing begins on April 17th. If the SDZ is approved, the council will be able grant permission to landowners which cannot be appealed to An Bord Pleanála.

Background of the site

The site of the old Irish Glass Bottle Company in Ringsend at the west side of the Poolbeg Peninsula was bought for €412 million in 2006 by a consortium called Becbay.

Becbay was 41 per cent owned by property developer Bernard McNamara and 33 per cent by financier Derek Quinlan, with the Dublin Docklands Development Authority (DDDA) owning the remaining 26 per cent.

The DDDA was set up in 1997 to govern the regeneration of the former industrial lands of the city’s east end.

After the crash, the value of the Glass Bottle site was knocked down to about €30 million. In 2012 the Comptroller and Auditor General found serious shortcomings in the conduct of the DDDA’s planning and development functions, specifically in relation to the purchase of the Irish Glass Bottle site.

The Minister for Environment at the time, Phil Hogan, the next day announced the DDDA would be abolished and its powers transferred to Dublin City Council. The same year Nama appointed receivers to Becbay.

In 2016, following several delays, the DDDA was formerly dissolved and its powers and assets were transferred to the council.