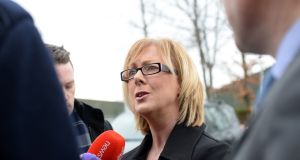 Social Protection Minister Regina Doherty said “we are trying to facilitate parents to be able to stay with their children if they want to.” File photograph: Dara Mac Donaill/The Irish Times

The introduction of two weeks paid parental leave in the next budget could cost the State about €30 million per year, Social Protection Minister Regina Doherty has said.

Reacting to a report in The Irish Times on Friday which said the Government was planning to introduce the measure in October’s budget, the Minister said the move was being taken to comply with EU commitments to improve the work-life balance of parents.

While she would not confirm exactly what duration of leave might be introduced in the forthcoming budget, she said the costing would likely be about €15 million per week, per year.

The duration of parental leave would be expected to increase over the next number of years dependent on finances.

However, while compulsory in some countries, Ms Doherty said this would not be the case in Ireland.

“There is no consideration of the Government of making anybody take anything,” she told RTÉ’s Drivetime programme.

“What we are doing is we are trying to facilitate parents to be able to stay with their children if they want to.”

Instead of increasing the current 26 weeks paid maternity benefit or two weeks paternity benefit, there will be a focus on introducing the parental scheme which would be available to both mothers and fathers and eventually reach 18 weeks.

“I want to ensure that whatever we introduce is not only best for families but is also in line with the EU charter of social pillar rights that we signed last December,” Ms Doherty said.

The move appears to have caused concerns among employers, representatives of which have been in ongoing discussions with Government.

“We are in negotiations with them because obviously at the moment it will impact them in so far as that it might remove more workers from the workplace for given periods of time than is currently the practice,” the Minister said.

“But also in a lot of cases businesses recognise that happy employees mean more productive business and environments and a lot of companies pay the top-up to what the State pays.”

Just 60 per cent of fathers eligible for paid paternity leave have availed of the scheme since its introduction 18 months ago, and the Minister said an awareness campaign had only recently been completed to advertise its availability.

Worth €235 per week, it is available for a fortnight and can be taken up to 26 weeks following the birth of a child.

Ireland is among just six EU countries in which employers are not obliged to finance parental leave.

Parents can currently avail of 18 weeks unpaid parental leave before the child is eight-years-old. The sub-committee has agreed to examine increasing the time period in which this benefit can be accessed to 12-years.

Asked about comments from a Government source that many of those who avail of the paternity leave scheme simply play golf, Ms Doherty said that was not an issue for her to determine.