Does Ireland really need so many Catholic dioceses?

As numbers decline, the church may have to consider amalgamations 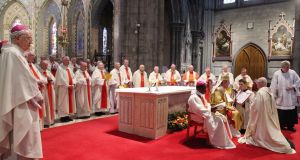 The ordination last month of Dermot Farrell as Bishop of Ossory. Nine episcopal vacancies will by next year need to be filled. Photograph: John McElroy

Usually, talk in the Catholic Church about staff shortages centres on country parishes having to consider closing churches, cutting down on the number of Masses being said every week, or, even, the prospect in the years ahead of delaying funerals. However, there is a lesser-known story: Ireland is running out of Catholic bishops.

Currently, some of the 26 Irish dioceses are without a bishop. There’s Achonry (Sligo, Mayo, Roscommon) from where Bishop Brendan Kelly was translated (the church term) to Galway last February.

Meanwhile the Bishop of Clonfert (east Galway) John Kirby submitted his letter of resignation to Rome on reaching the age of 75 in October 2013, nearly five years ago. The Bishop of Cork and Ross, John Buckley, did the same in 2014, as did Bishop of Meath Michael Smith in 2015.

That is not all. There will be three further Irish episcopal vacancies in 2019 when Bishop of Kilmore (mainly Cavan, Leitrim, Fermanagh, Meath, Sligo) Leo O’Reilly reaches 75 as will auxiliary bishops of Dublin Ray Field and Eamon Walsh.

That is nine episcopal vacancies to be filled by next year, with a new Archbishop of Dublin to be appointed in 2020 when Archbishop Diarmuid Martin reaches 75 and a new Bishop of Ferns that year also, when Bishop Denis Brennan is 75.

Or will they too be persuaded to hang on into old age? If not it will bring the number of episcopal vacancies in Ireland to 11 within the next two years, which amounts to well over a third of Catholic bishops on the island.

The time has come to discuss amalgamation. Or to quote that recent visitor to Ireland and current mayor of Chicago Rahm Emanuel: “You never let a serious crisis go to waste. And what I mean by that it’s an opportunity to do things you think you could not do before.”

In such crisis it is possible to overcome resistance that may have been unmovable not so long before before. It is said that when the previous papal nuncio Archbishop Charles Brown, who moved to Albania last year, mooted the idea of amalgamating some dioceses at a meeting of the Irish Catholic bishops in recent years he was met with a stony silence.

He may have gone to pastures new, but the issue remains as pertinent as ever and may have to be addressed by his successor, Archbishop Jude Okolo.

The general outline of all Catholic and Church of Ireland dioceses in Ireland today was established at the Synod of Kells in 1152, all of 866 years ago.

This was before the Norman invasion and before the establishment of most counties in Ireland today, which is why no diocese in Ireland concurs with county boundaries. The dioceses are older than the counties in most cases.

It is an understatement to say the Synod of Kells was intended to meet the needs of a very different Ireland. One where, for instance, it was deemed wise that every diocese have access to sea, river or lake as an escape route.

The Church of Ireland has long since amalgamated its dioceses into 12, including two archdioceses, and with ongoing discussion of the possible amalgamation of Tuam into another one or two dioceses, which would reduce the number to 11. However, there is resistance to this too, based on tradition and identity.

But is it not time for another synod, or some such, in the Irish Catholic Church to look at diocesan structures in the light of modern needs.

There are many reasons why in some instances amalgamation would be a good idea. It would reduce the cost of administration and pressure on finances. It would reduce the number of bishops, which would speed up decision-making and put less pressure on an ever smaller pool of talent from which to select deserving candidates. Above all it would help ensure the protection of children.

That may seem an odd reason but here is a comment from the report by the church’s child protection watchdog, its National Board for Safeguarding Children (NBSC), into Dromore diocese published in December 2011.

Dromore, with 23 parishes, is one of the smallest dioceses in Ireland. The NBSC noted: “Dromore diocese is a relatively small diocese with a total of 23 parishes”.

There were, it said, “significant challenges in responding to allegations of abuse in smaller dioceses which are not evident in larger dioceses; for example, the familiarity between the priests and bishops and the consequent personal stress which follows when a bishop has to take action to restrict a priest’s ministry, and the lack of resources to employ independent safeguarding personnel”.

That was in December 2011, more than six years before the current furore in Dromore over the handling of clerical child sex abuse allegations there against Newry priest Fr Malachy Finnegan which has led to the resignation of Bishop McAreavey and a special Police Service of Northern Ireland inquiry.

So, looking at the map of Irish Catholic dioceses, why not amalgamate Dromore with Armagh archdiocese, bringing its total of parishes to 84?

That would still be four parishes fewer than neighbouring Down and Connor diocese (mainly Antrim and parts of Down), which has 88 parishes.

Similarly, the two neighbouring dioceses of Kilmore (36 parishes) and Clogher (37) could be combined, giving a total of 73 parishes. Clonfert in east Galway, with its 24 parishes, could be amalgamated with Galway diocese (39 parishes), bringing the total of that new diocese’s parishes to just 63.

Also in the west, Achonry and its 23 parishes could be combined with Killala’s 22, to bring a total of 45 parishes to the new amalgamated diocese.

That would reduce the number of Catholic dioceses in Ireland by only four, bringing it down to 22, but it would be start. One could go much further when it is considered that Dublin has 199 parishes; Down and Connor has 88; Cork and Ross has just 68; and Limerick has 60. Galway has just 39 and Elphin (Sligo, Roscommon, Galway and Westmeath) has 38. Far too small.

There would, of course, be resistance, particularly from clergy, including bishops. However, with the current age profile of priests in Ireland it looks as if radical decisions about the amalgamation of dioceses, as with parishes, will be forced on the church in Ireland out of necessity.

And, let us remember, parish clustering/amalgamation has been going on in Ireland for well over a decade and with little resistance. As the number of Catholic priests continues to decrease and the remaining men are ageing, now averaging age 70, parish clustering has become the practice in most dioceses.

For instance, the diocese of Killaloe, stretching from Loop Head in Clare to the foothills of the Slieve Bloom mountains in Laois, has 58 parishes grouped into 12 clusters.

In Dublin, three parishes have clustered in Clontarf: St Anthony’s, St John the Baptist and St Gabriel’s, Dollymount. Dundrum has been clustered with Ballinteer and Meadowbrook. While in Co Wicklow, Arklow, Castletown, Aughrim and Avoca have been clustered.

Any criticism of parish clustering has usually centred on the priests involved, of whom it is claimed that as they get fewer and older their workload is increased, with many working well past retirement age.

Where the laity is concerned there has been little in the way of complaint, and laity tend to identify far more with parish than diocese.

It is clergy who identify most strongly with their diocese. One way of softening their resistance to amalgamation would be to include the name of the amalgamated diocese into the title of the new one as in, for instance, the Church of Ireland diocese of Cashel, Ferns and Ossory.

As with the Church of Ireland amalgamations, the cathedrals in each of the amalgamated dioceses could remain in use and be visited regularly by the bishop. So, for instance, were Killala and Achonry to be amalgamated into the new diocese of Achonry and Killala (alphabetical order) Bishop John Fleming, current Bishop of Killala, would be a regular visitor to the Cathedral of the Annunciation and St Nathy in Ballaghaderreen.

Clergy resistance may resolve itself naturally in the not too distant future. As the average age of Catholic priests in Ireland moves ever closer to the retirement age of 75 the amalgamation of dioceses is likely to become something of lesser importance in the years ahead.