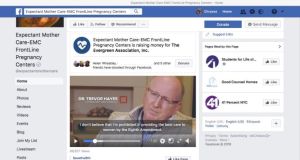 A screenshot from Chryssa Dislis’s Facebook page with the names of some of her friends underneath a post from an anti-abortion group.

Facebook has removed a feature that appeared to suggest to users that their friends were donating to particular causes after a woman in Cork complained that friends’ names were shown to her as “donors” under a post from a US-based anti-abortion organisation.

The move follows the Cambridge Analytica scandal involving the profiling of tens of millions of users in the US ahead of the US presidential election. It also comes amid concerns that targeted advertising might be used to influence the Irish referendum on the Eighth Amendment in May.

Chryssa Dislis, a programme manager and engineer living in Cork, told The Irish Times that when a post from Expectant Mother Care-EMC Frontline Pregnancy Centers was displayed on her page last week she believed it was some kind of “targeted ad”.

The names of two of her friends came up under the post, which contained a video in support of the Eighth Amendment linked to a donation form. The text under the post read that these friends and five others had “donated through Facebook”.

“It kind of alarmed me because it’s a particularly horrible page,” Ms Dislis said.

The New York-based EMC organisation describes itself on its website as “an innovative leader serving in the mouth of the abortion capital where 70,000 abortions are done annually”.

“Because of our missions and services, we have been able to save 43,000 innocent children from abortion. As we grow, we have plans to grow into other cities and states,” it says.

Ms Dislis said a friend had alerted her to the content on Saturday, saying it appeared from another friend’s page that she had made a donation to a pro-life site.

She attempted to report the feature to Facebook but there was no option to do this.

Helen Wheatley, one friend whose name appears under the post on Ms Dislis’s page, said the post appeared to claim she had made a donation.

“I did not. I would never consider making a donation to this organisation which is the total opposite of my thoughts on the matter,” she said.

Ms Wheatley, who is based in the UK, said: “It is very clear that this is a misuse of my data and could affect the Irish referendum. It could also affect the way my friends view me and my reputation.”

A spokeswoman for Facebook in Ireland said that having looked into the issue and having heard feedback from users, the company realised the manner in which the information appeared was confusing, so it had removed the feature.

“Within our Facebook Fundraisers tool, we had a feature to show people that their friends have previously supported a fundraiser,” she said.

“We learned that the placement of this content could be confusing and appear to connect people to a cause they did not directly support. We’ve turned off this product feature globally and we’re sorry for any confusion that it caused.”