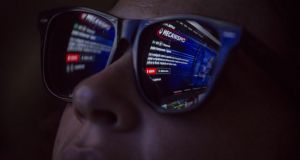 YouTube, Spotify, Netflix and Amazon aim for you, and you alone, tailoring their wares directly and solely to your forehead. File photograph: Rodrigo Capote/Bloomberg

A recurring criticism around streaming platforms is that the bespoke, personalised media environment isolates consumers, denying their audience that thrill of communal consumption enjoyed in the olden days, when TV or radio events were watercooler moments that brought entire nations together.

Their point is, I guess, that it would be inconceivable for 21 million Brits to sit down and watch Del and Rodney dress up as Batman. My point is, merely, “Thank God”. The thought of having to consume culture from one, universal menu of mass-approved content induces in me the sort of cloying, wet dread I only otherwise associate with having to leave the house.

YouTube, Spotify, Netflix and Amazon aim for you, and you alone, tailoring their wares directly and solely to your forehead. In light of this week’s revelations about Big Data, however, some wonder if the hyper-personalised media experience is worth having your information harvested by unscrupulous providers.

We’ve all tasted that dark note of paranoia on realising even the briefest glimpse of a friend’s YouTube can reveal an all-too-intimate snapshot of their innermost passions, their taste for watching footage of woodworking, Bros, or old Martina Hingis matches.

In the wake of the Cambridge Analytica Facebook scandal, people are asking how providers use this information, and some of the facts are disconcerting to say the least.

Love it when my record player and VCR use their constant surveillance to insult me pic.twitter.com/5T7wgOxvF2

YouTube saves every video you’ve ever searched or watched, but the Google-owned video giant also sells advertisers wider data for targeted browsing, meaning that those old No Doubt videos will bear ads pulled from your search history.

Netflix also has a deep trove of personal info, as evidenced by the ads it released in December creepily attesting to its granular data.

“To the 53 people who’ve watched A Christmas Prince every day for the past 18 days” asked one, “Who hurt you?”.

Ditto Spotify who also rolled out an entire campaign based on specifying the individual consumption habits of its sad-sack customers. “Dear person who played Sorry 42 times on Valentine’s Day, what did you do?”.

Although aiming for a sort of cutesy familiarity, many users were weirded out by the vaguely sinister wording.

As the Electronic Frontier Foundation’s Parker Higgins responded “Love it when my record player and VCR use their constant surveillance to insult me”. With Facebook now pledging to overhaul its privacy rules, perhaps others will follow suit now that public pressure is gaining against the always-on snooping of the modern world.

Failing that, they might resist the urge to print it all over billboards, at least until society’s love affair with creepy oversharing resumes in earnest sometime soon.