Facebook tells Minister it will not add tools to authenticate accounts 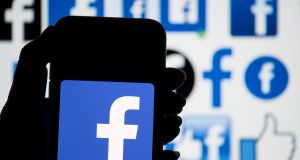 Facebook told Minister of State Jim Daly it would not be introducing any new measures to authenticate accounts when opened. Photograph: Dominic Lipinski/PA Wire

Minister of State Jim Daly had written to Facebook chief executive Mark Zuckerberg last December seeking his support for stricter controls on registering for accounts through what he called an “online verification code”.

The company subsequently agreed to meet him at its Dublin headquarters last February where it gave a presentation on Facebook’s safety features.

However, Facebook told the Minister it would not be introducing any new measures to authenticate accounts when opened.

Mr Daly is Minister of State at the Department of Health with special responsibility for mental health and older people. He is also chairman of the Oireachtas Joint Committee on Children and Youth Affairs.

Minutes of the meeting released under freedom-of-information legislation note that Mr Daly criticised his own Government for failure to safeguard young people online.

He told Facebook there was “no joined-up thinking between . . . departments to protect children online and to authenticate online . . . identity”.

Mr Daly told the social media giant his main concern was not with Facebook’s procedures and tools once you own a profile but about how the registration process worked.

Notes of the meeting said: “[The Minister] questioned how Facebook ensures a profile user is the required age of 13 years and is their username definitely matching their real name as per Facebook policy.

“Minister question[ed] can I open a Facebook profile with an unknown email address or phone number and a false date of birth – answer was yes you can.”

Facebook told him that it monitors and has taken down many profiles that are reported to them relating to false identity.

These reports were in some cases made by schoolteachers of underage users, the company said; others were made anonymously.

The notes said: “Minister pressed would Facebook be opposed to strengthening authentication process seeing as it is Facebook policy to use a real name and be 13 years old . . . if the State were to assist Facebook and others with an online verification code.

“Facebook said they would have concerns around data protection and they said users should not be forced to enter another field of info to open an account.”

According to the minutes, the Minister said he would now be writing to Data Protection Commissioner Helen Dixon to look for her views on what could be done.

The meeting was described as a “good discussion” with “everyone at the table also agreed there were gaps in the authentication and registration process”.

The meeting was attended by the Minister, his special adviser Darren Hourihane and three senior staff from Facebook including its director and head of data protection, its head of content policy, and its counsel (content and regulatory).

A spokesman for the Minister said Mr Daly had since written to the Data Protection Commissioner about his plans for online verification.

“The meeting with Facebook was constructive and informative,” he said. “However, Minister Daly remains concerned about how easy it is to set up a fake social media account.”

The spokesman said the Government had now moved ahead with a cross-departmental approach to deal with issues around social media accounts and online identities. He said the Minister was “very appreciative” of the proactive approach of Taoiseach Leo Varadkar “to bring focus to the area and bring about change to better protect our children online”.

But Mr Varadkar has already shot down at least one part of Mr Daly’s plan, when he suggested registering for social media accounts could be linked to the controversial public services card. The Taoiseach said to do so would be a “restriction on privacy and people’s freedoms”.