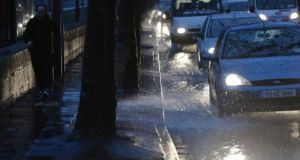 Heavy rainfall has been predicted in the coming days. Photograph: Alan Betson

Freezing overnight temperatures are due to subside on Thursday morning but a warning of heavy rain and flooding remains with the long winter showing no signs of letting up.

Temperatures on Wednesday night were due to fall as low as -3 or -4 degrees in many areas around the country.

With those conditions easing, focus is now switching to heavy rain lasting from Thursday evening and into Friday.

A yellow status weather warning, the least severe issued by Met Éireann, has said counties Carlow, Kilkenny, Wexford, Cork, Kerry, Limerick, Tipperary and Waterford could experience between 30mm and 50mm of rain and a risk of flooding.

With hopes that spring might finally arrive, conditions over the weekend are expected to be largely mixed.

Friday night is due to be mostly dry while the weekend should see mild and sunny conditions, albeit interrupted by the odd thunder shower.

Meanwhile, the forecaster has said March was characterised as “very cold, heavy snowfall in many areas” with low temperature “ice days” being recorded for the first March ever.

Rainfall totals were however below their long term averages in most places during the month, according to the latest monthly report from Met Éireann.

According to the forecaster, the snowfall was heaviest in the Wicklow mountains where accumulations of 69 cm were recorded after three days of snowfall from March 1st to March 3rd. Snowfall accumulations are different to is to drifting snow which can be several metres high when blown by wind.

The percentage of monthly rainfall ranged from 48 per cent at Mace Head, Co Galway to 251 per cent at Dunsany, Co Meath. Dunsany also recorded the wettest day with 53.2 mm on March 2nd.

On the 1st and 2nd, temperatures did not rise above zero at a number of locations. Met Éireann said these were “ice days” which had not previously occurred in March. The month’s highest temperature, 13.9 degrees, was reported at Shannon Airport, Co Clare on March 10th and Valentia Observatory, Co Kerry on March 11th.

The temperature of 13.9 degrees was the lowest maximum for March at Shannon Airport since 2008. The month’s lowest air minimum was also recorded at Cork Airport on March 1st with -7 degrees; its lowest minimum for March since 1962.

The lowest grass minimum was -13.2, reported at Markree, Co Sligo on the 20th.

In terms of sunshine the highest monthly totals ranged from 80 per cent of long term averages at Casement Aerodrome, Co Dublin to 108 per cent at Shannon Airport, Co Clare .

The month’s highest monthly sunshine total was 128.4 hours at Belmullet, Co Mayo and the lowest was at Dublin Airport with 79.6 hours.