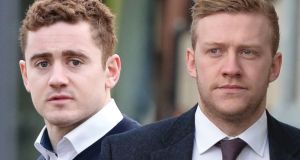 Northern Ireland’s Lord Chief Justice has ordered that a media application to lift reporting restrictions on the rape trial of Paddy Jackson and Stuart Olding be heard on Monday.

Following the completion of the trial last Wednesday, which saw all four accused acquitted, Judge Patricia Smyth ordered that there should be no reporting of the legal argument which took place during the trial in the absence of the jury.

The purpose of reporting restrictions on legal argument is generally to prevent a jury being prejudiced by material heard in its absence. Such restrictions typically fall away after a trial once a jury has been discharged.

After the verdict several media organisations, including The Irish Times, objected to Judge Smyth continuing restrictions post-trial. Judge Smyth refused to hear the application and postponed the matter until April 25th for a full hearing.

Following this adjournment, the media made an application for an expedited hearing date.

Today at the Court of Appeal in Belfast, Lord Chief Justice Declan Morgan said he appreciated the fact that “news is perishable” and said that Judge Smyth has now agreed to hear the matter on Monday, April 9th.

Chief Justice Morgan, who was sitting as a Crown Court judge, said that any objections to the order should be lodged by close of business on Friday. Counsel for Stuart Olding, Frank O’Donoghue QC, objected to this deadline saying it would not be possible to furnish objections by Friday.

He said he is due to go away this week and that his junior in the case is already abroad. Furthermore Arthur Harvey QC, representing co-accused Blane McIlroy, is currently in America, he said.

Mr O’Donoghue said he needed time to sit down and work out what information the media is seeking permission to report.

This is understood to be a reference to a review faced by Mr Jackson and Mr Olding by Ulster Rugby and the IRFU and a civil action taken by the two men against the BBC for breach of privacy.

Mr O’Donoghue said there is also a general concern that further publication of “prejudicial material” could undermine the not guilty verdict delivered by the jury. He said certain material has already appeared in the press which has not been respectful of the verdict.

The Lord Chief Justice told counsel any timetable problems can be raised on Monday with Judge Smyth.