Travellers in Wexford ‘severely disadvantaged’ when compared with settled population 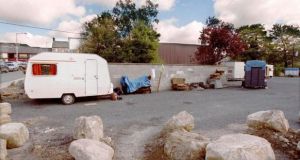 Equality legislation, according to a report written by social policy expert Brian Harvey, has ‘almost completely’ failed to protect Travellers from discrimination.

There is an “overwhelming need” for the education system to “prove its relevance” to Travellers, a report on the community in Co Wexford finds.

It identifies the widespread failure of the education system to retain Traveller children to Leaving Certificate or provide them with employable skills as “the most important . . . determinant of outcomes” for Travellers.

Housing and accommodation, as well as systemic discrimination in all aspects of their lives, were identified by Travellers themselves as important. The report, Needs Analysis of Traveller Community in Co Wexford, is written by social policy expert Brian Harvey. It was commissioned by the Wexford Traveller Interagency Group which works under the auspices of Wexford County Council.

It finds there are 1,508 Travellers in Wexford, across five main locations – New Ross, Enniscorthy, Bunclody, Wexford and Clonroche.

They “could be clearly identified as severely disadvantaged”, compared with the settled population.

“The analysis of how [the community’s] needs could be met focused on the importance of education from the perspective of employment and the Traveller economy, which would re-value education and schooling.”

A “recurrent theme” from Travellers’ perspective of education was “the lack of outcome” and phrases like ‘What’s the point?’ and ‘You’ll never get a job anyway’, were frequent.

“A lack of confidence by Travellers in the education system is entirely rational if 10 years of schooling delivers poor educational outcomes and valueless qualification,” says the report, describing a “generalised sense of non-engagement” among both children and parents.

“This suggests strongly that the educational problem has to be tackled as much as the labour market and employment end.”

The report calls for Traveller representation on the Wexford County Childcare Committee – which oversees early child education services; reinstatement of the visiting teacher service for Traveller children at primary schools (this national service was cut 100 per cent in 2008); and increased services to support Travellers at secondary level.

Equality legislation, it says, has “almost completely” failed to protect Travellers from discrimination. Among the daily prejudices recounted were not being able to book venues for family events, being followed around shops by shop assistants, being refused access to nightclubs, hair salons, bars and race-tracks.

“Discrimination took its toll in a loss of confidence, and fear. It was pervasive and universal . . . and imposed a high toll on Travellers both individually and collectively.

“One of the main needs was for conceptual, paradigmatic change, accepting the scale of the issue of discrimination [and] the need to reverse underinvestment.”