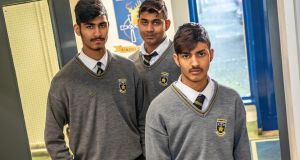 Five siblings who have been living in the State’s direct provision system have had their deportation cancelled following a last-minute intervention by Minister for Justice Charlie Flanagan.

Cork-based students Hamza, Zubair, Umair and Mutjuba Khan faced being removed from the country as early as Thursday afternoon along with their sister, Shazadi, and parents Mubeen and Hina.

The asylum seekers were told of plans to deport them last Friday after being refused international protection after arriving from Saudi Arabia two years ago.

They say his successor King Salman and his son Prince Muhammad Bin Salman introduced new laws that favoured Saudi citizens. Under these, each family member had to pay a tax that increased by 100 per cent each year and they said that in order to pay this the children would have to drop out of school and get jobs.

Another law introduced in 2017 resulted in Mubeen losing his job in a drapers’, and if unable to pay their taxes the family faced deportation to Pakistan. The family left Saudi Arabia and arrived in Ireland via England.

“The Khan family are obviously overjoyed at today’s news and thank the people of Ireland for coming to their aid in their time of need,” he said. “A planned demonstration to support the Khan family is cancelled. Instead we shall celebrate this news in school.”

Hamza (20), the eldest of the children, is studying computer science in UCC having completed his Leaving Certificate last year. Umair (16) says his dream is to study medicine. “If I lose this opportunity I won’t get any opportunity to go to college. I liked work experience. I was in Tesco in Paul Street [in Cork] and I did shelving. Transition year is very exciting.”

Zubair (17), a fifth-year student and talented cricketer, said his parents had been sick with worry since the news of the planned deportation emerged.

Mutjuba, who is in second year, has become a true Corkonian in his two years in Ireland peppering his sentences with the word “like”.

The boys received the backing of UCC, the Edmund Rice Trust, and their school as they campaigned to stay in Ireland.

A group of their fifth-year classmates gathered in the school on Wednesday to offer them their support.

Maksim Maksimmrdanoe, who moved to Ireland from Serbia last year, said he was warmly welcomed by the Khans after starting at the school.

“They are all really nice. Right away Zubair helped me to settle in. Then I met the rest of the guys and they were really nice,” he said.

Hamza Khan (20) is a first-year sanctuary scholar studying at UCC. In a statement UCC say that in the space of just two and a half years, Hamza’s academic trajectory has been very impressive.

“He made a huge impact on his school, Deerpark CBS. Not only did he achieve a strong Leaving Certificate, he won the Most Improved Student award 2018 and Student of the Year award in 2019. “

UCC was designated University of Sanctuary status in 2018 and offers Sanctuary Scholarships to refugees and asylum seekers seeking to study in higher education.

Fourteen scholarships have been awarded since the undergraduate scholarship scheme began in 2018, and several Adult and Continuing Education scholarships were launched this year.