Grafton Street rental is 13th most expensive in the world 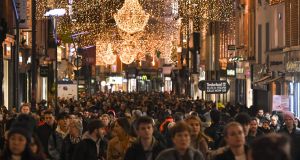 While the relentless rise of online shopping challenges physical retail for the hearts, minds, and the pockets of consumers, the world’s most-expensive shopping streets would appear still, to have an important role to play in showcasing and selling luxury brands.

That’s the key takeaway from the latest “Main Streets Across the World” report from Cushman & Wakefield, which shows that high-end retailers continue to pay a premium to maintain a presence on the toniest thoroughfares.

A survey of 448 locations across 68 global markets shows that Hong Kong’s Causeway Bay has retained its title as the world’s most expensive shopping street, with rents to locate a store coming in at an eye-watering $2,745 per sq ft (€25,965 per sq m) per year.

In terms of Irish interest, Grafton Street’s rental rate of $401 per sq ft per year (€3,794 per sq m per year) sees it hold on to 13th position in the global rankings of the most expensive streets, and seventh place in Europe.

Commenting on Grafton Street’s performance relative to its European and global peers, Karl Stewart, head of retail at Cushman & Wakefield in Ireland, said: “Grafton Street, has maintained its status of number 13 in the rankings of the most expensive high streets globally, reflecting the strength of demand for Ireland’s prime shopping street. This is despite the continued challenges which are presenting themselves both in the sector as a whole, particularly to the high street market, where retailers are seeking competitive terms comparable to those available in the shopping centre sector.”

The report’s author, Darren Yates, head of EMEA retail research at Cushman & Wakefield, added: “In terms of rental performance, this year’s results are encouraging and demonstrate the resilience of the premier retail locations. Rents on the world’s top retail streets have been fairly stable and there is greater clarity on where retail is heading. However, there is downward pressure on rents in many weaker locations, particularly in the more mature markets of Europe and North America. In Asia Pacific, retail has generally performed well across a very diverse group of markets.”

Referring to the challenge physical retail faces from the growth of online shopping, Mr Yates said: “Online sales continue to increase around the world, but while much of the narrative is focused on the challenges the internet poses for traditional bricks and mortar, the relationship between the two is more complex. While quantifying the value of the store has become more difficult, it remains an important touchpoint for the consumer and generates both in-store and online sales by acting as a showroom and creating a wider brand presence – the so-called ‘halo effect’. The most successful retailers will be those who best integrate their physical and online operations to create a seamless, positive brand experience for shoppers.”