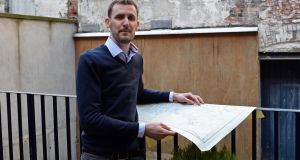 A planning application to demolish a terrace of Georgian houses on Kildare Street has been lodged with Dublin City Council.

Ternary Ltd, a company controlled by the family of businessman Larry Goodman, is behind the proposal to demolish the houses at 47, 48 and 49 Kildare Street and 1 Nassau Street.

Number 2 Nassau Street is the only building on the proposed development site which is on the council’s record of protected structures. Ternary proposes to retain 2 Nassau Street, with the exception of a 20th-century fourth floor, which is to be replaced.

Earlier this year Ternary received planning approval from An Bord Pleanála for a €100 million redevelopment of the adjacent Setanta Centre, part of which adjoins the western end of the hotel site.

The application has been sharply criticised by conservationists including the Dublin Civic Trust, which described it as “astonishing, sitting as it does on the approach to Leinster House”.

Envisaged to replace the terrace of houses is a building rising to five storeys, over a two-storey basement. It would be “stepped back” to incorporate a roof terrace at the Kildare Street and Nassau Street corner, which overlooks College Park in Trinity College Dublin.

With the exception of the Setanta Centre, the Kildare Street Hotel, at 47-49 Kildare Street, is bounded by protected structures at 3, 4 and 5 Nassau Street and 46 Kildare Street which are not part of the proposed development.

The planning application says the “proposed development has been subject to expert conservation assessment”.

However Graham Hickey, conservation director with the Dublin Civic Trust, said he was “astonished” at the application.

“By any standard,” he said, it was “a truly unbelievable planning application”.

Mr Hickey said the application highlighted the fact that the hotel buildings were mostly not listed as protected structures when other buildings in the terrace were. He said “the omission from the Record of Protected Structures of most of the group, in the epicentre of establishment Ireland and in a critical historic streetscape, is highly unorthodox.

“For a developer to deem such an outlandish plan as having even the faintest shred of a chance of achieving permission is seriously concerning if it is reflective of attitudes to what is now up for grabs in Dublin,” he said.

The group of late Georgian houses dates from around the late 1820s and Mr Hickey said they compose “a key approach to Leinster House”.

“The terrace features some of the best quality handmade brickwork in the city, historic sash windows and balconettes, roof structures and chimneys. The houses have experienced superficial alterations of the years, but have retained their coherence and can easily be restored to a high quality – never mind premium – state” he said.

Mr Hickey said the corner building “presents a rare example of a 1940s-era reconfiguration, with interesting fenestration and decorative apron panels”. He urged conservationists to make submissions on the proposal by the deadline of December 12th.

The developer’s planning consultants were contacted but a spokesman was not available.