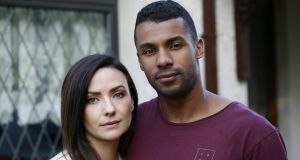 Fiona Ryan with Jon Mathis have had ‘huge support’ and spent the weekend in Ireland with family, but plan to leave again. File photograph: Nick Bradshaw/The Irish Times

A mixed-race Co Meath couple, who have left Ireland after a death threat and abusive and racist comments online , say they will not speak publicly again as they “need to lay low”.

Fiona Ryan (33) and her fiancee Jonathan Mathis (32) say the underlying issues are “bigger than us” and are calling on “as many people as possible” to sign an online petition demanding hate-crime legislation.

The couple travelled to Britain on Sunday, September 29th, with their son (22 months), after receiving a message, they say, via social media threatening to kill them and referring to Mr Mathis and their son as n****rs.

The threat came after their decision to speak publicly about their experience of online abuse following their participation in an advertising campaign for Lidl supermarket.

On September 7th, former newspaper journalist Gemma O’Doherty tweeted the advert, with the comment: “German dump @lidl_ireland gaslighting the Irish people with their multicultural version of ‘The Ryans’. Kidding no-one! Resist the Great Replacement wherever you can by giving this kip a wide berth. #ShopIrish #BuyIrish.”

The couple expressed their frustration at initial reluctance by gardaí to take a statement from Ms Ryan reporting the tweet and other abusive comments. They were told it was a civil matter.

However, after advice from the European Network Against Racism Ireland (Enar) they filed a report and have had a meeting with an investigating officer.

Following several radio and television interviews in late September Ms Ryan was shocked that Ms O’Doherty continued to tweet about her family, describing their interviews as “a scam” and saying Lidl was guilty of “false advertising”.

Some online commenters were “really racist”, “trying to hack into our private settings on social media accounts”, thay say. On September 28th they say a death threat was made.

“I was so shaken I broke down in tears. It was the last straw and, yes, we decided we really need to lay low, to leave. We booked flights. We just thought, could they actually find us if we stay where we are?” said Ms Ryan.

They accepted an invitation to appear on the Late Late Show last Friday, “to make a call to action to the Irish people to act and to sign Enar’s petition and support the amazing work they do.

“We want the Government to act, to bring in hate-crime legislation. Nothing is being done. We don’t feel comfortable in a country where the law does not protect families like ours.”

They have had “huge support” and spent the weekend in Ireland with family, but plan to leave again.

Minister for Justice Charlie Flanagan said: “The type of abuse suffered by the Ryan family is completely unacceptable in a modern, civilized society . . . I remain fully committed to ensuring that Ireland is a safe and secure place for all and that appropriate tools are in place to address racism and xenophobia in all forms.

“My Department is reviewing provisions of the Incitement to Hatred Act 1989, which is now 30 years old.”

A public consultation will begin “later this autumn” he added.

Ms O’Doherty did not respond to contacts from The Irish Times by phone, text and direct message, on Sunday.