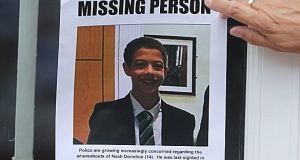 The PSNI believe Noah left his home in South Belfast on Sunday at about 5.30pm.

Unfounded speculation and rumours about missing Belfast teenager Noah Donohue have been “unhelpful and distressing” for his family, according to the police superintendent leading the search.

Supt Muir Clark said the operation remained a missing person’s inquiry, and the main hypothesis was that “Noah has in some way suffered an injury and is disorientated and requires assistance.”

However he also said police “don’t discount any other scenario, we should look at other scenarios and we will continue to do that until we find Noah”.

A large-scale search has been taking place in north Belfast since Sunday, and has been widened on Thursday to include the Antrim Road and the city centre. Noah’s school, St Malachy’s College in north Belfast, has also been searched.

The 14-year-old, from south Belfast, was last seen in the Northwood Road area in the north of the city just after 6pm.

He had cycled across the city, and police believe he may have fallen off his bicycle and hit his head. He was seen discarding his clothes and cycling naked or nearly naked, actions which police and his family said were “completely out of character”.

Police officers supported by an air support unit, police dogs and a tactical support group have been searching the area alongside community rescue service colleagues and local volunteers.

On Thursday police thanked volunteers for their help, but appealed to them to allow police and community rescue teams “some space to ensure we have covered every possible area”.

Speaking at a press conference on Thursday afternoon, Supt Clark made a specific appeal for a number of personal items belonging to Noah which have not yet been found.

These are a khaki green North Face coat, grey sweatshorts and a green backpack containing a Lenovo laptop and a copy of the book, Twelve Rules For Life by Jordan B Peterson.

“We need to find these outstanding items. If anyone has found any of these items and not yet come forward, please contact us immediately,” he said.

Mr Clark said it was “still not entirely clear why Noah went to that area of north Belfast” and police “continue to look at a number of avenues that will allow us to firmly establish why Noah was in that area”.

In a statement on its website on Thursday, St Malachy’s College said everyone at the school was “praying that Noah is found and returned safely to his family.”

He was described as “a most valued and popular member of our Year 10 group of boys” as well as an “industrious and intelligent academic” and a “talented cellist” who “immerses himself in the extra-curricular life of the College through music and sports.”

The PSNI believe Noah left his home in South Belfast on Sunday at about 5.30pm. He was riding a black Apollo mountain bike and wearing a black skateboarding helmet, khaki green North Face jacket, grey sweat shorts with an emblem on one leg, a tie-die blue hoody, Nike trainers with a bright yellow “tick” and carrying a khaki rucksack.

He was seen on Ormeau Avenue at 5.45pm on Sunday evening, and on Royal Avenue heading towards York Street a short time after, then on North Queen Street heading towards the Limestone Road at 5.57pm.

He was last seen cycling naked on Northwood Road, where police believe he dropped his bicycle and left the area on foot. There have been no further confirmed sightings since 6.11pm on Sunday.

The North’s First and Deputy First Ministers appealed to property owners in north Belfast to check unoccupied houses, garages or outhouses for any signs of the teenager, and sent their support to his family and friends.

Speaking at the Northern Executive’s daily coronavirus briefing, Arlene Foster said Ministers’ thoughts were with his family and particularly his mother Fiona, “who’s having to go though the worst kind of nightmare, the kind of nightmare that no parent should have to endure. Please know that everyone stands with you and the safe return of Noah is very much uppermost in our thoughts,” she said.

Anyone with information is asked to contact police in north Belfast on 101.