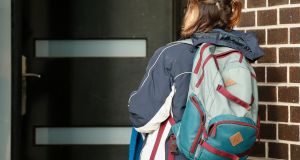 Victoria State officials knock on doors in Broadmeadows to check if people have any symptoms of Covid-19 disease and would like a test, in Melbourne, Australia. File photograph: EPA/Daniel Pockett

The number of Covid-19 clusters reported in private houses has reached 500, surging by 110 clusters - a 28 per cent increase - in a single day, new official figures on the disease show.

The most recent daily report from the State’s Health Protection Surveillance Centre shows that an increase in the number of clusters reported in private houses to 500 based on figures up to Monday.

This is an increase from 358 reported to the HPSC as of Saturday and 390 on Sunday, according to the daily reports published over recent days.

Over the same three-day period, 32 new Covid-19 cases were reported.

The significant difference in the number of new cases and reported clusters in private houses is down to a time lag in the reporting of family outbreaks.

A spokeswoman for the HSEconfirmed the time lag in the reporting of Covid-19 family outbreaks to the HPSC.

She said the HSE was aware of these family outbreaks at the time of their occurrence and they were thoroughly investigated and public health control measures were implemented in a timely fashion.

Although reported on the national outbreak surveillance database (CIDR) as Covid-19 cases, they were “subsequently reported on that system as family outbreaks,” the HSE said.

The reason for the lag in reporting “was due to resources being prioritised to ensure that Covid-19 outbreaks in healthcare facilities, residential settings and vulnerable group settings were reported in a timely fashion to the national outbreak surveillance database,” the HSE spokeswoman said.

While the number of clusters in congregated settings such as nursing homes has remained steady with many outbreaks being closed after two 14-day Covid-19 incubation periods passing without a single new case being recorded, the rate of increases being reported in private households has surged.

A cluster is defined as two or more people being infected with the disease in one location.

The number reported in the south of the country rose from 59 to 83 in the daily report for Monday, according to the latest HPSC data on Covid-19.

The latest HPSC daily report says that new Covid-19 outbreaks reported earlier this month - in weeks 24 and 25 - some 187 new family outbreaks were reported, of which 78 occurred in March, 67 in April and 16 in May.

The number of clusters reported in private houses has more than doubled in just 11 days this month, rising from 240 on June 11th with the greater increase being recorded over last weekend.

The number of clusters in private houses now stands at almost double the next highest location for clusters: nursing homes where there have been 257 clusters of Covid-19 infection.

Private houses surpassed nursing homes as the location with the most outbreaks on June 12th.

As of last week, some 190 nursing homes clusters had been closed.

There have been 1,727 coronavirus-related deaths and 25,405 known cases of the disease in the State. The number of deaths and new cases reported every day has fallen significantly this month.

However, HSE chief clinical officer Dr Colm Henry said at a briefing on Wednesday that the increase in the number of household coronavirus clusters was “a worry”.

He said that even though the rate of transmission of the virus was low in the community, there were still outbreaks of the virus and it can cause harm particularly to vulnerable people.

Dr Henry urged people to continue to follow public health guidance on social distancing and the need to avoid congregated settings as the country reopens from lockdown restrictions.

He echoed remarks by World Health Organisation director general Tedros Adhanom Ghebreyesus who this week urged all countries to “double down on the fundamental public health measures” that work to prevent the spread of the virus.