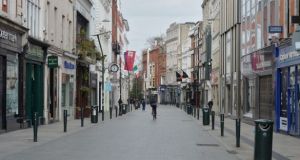 A Government scheme which pays the councils rates of businesses hit by the coronavirus pandemic will expire tomorrow.

Dublin local authorities said the scheme, which has been in place for three months, must be extended if councils are to continue to provide essential public services.

However, no decision has been made to extend the scheme and the Department of Local Government said a “review of options to support enterprise and employment, and associated local authority funding implications” has yet to be completed.

Under the rates waiver scheme, the Government agreed to directly pay commercial rates from March 27th to June 27th to local authorities on behalf of businesses “forced to close due to public health requirements”.

However, local authorities said they are unlikely to see a return of payments from businesses, as even those that have reopened will continue to struggle financially.

The four Dublin local authorities receive significantly less in central Government funding proportionately than their rural counterparts and rely on rates for between a third and half of their budgets.

“It is clear that many businesses will be impacted beyond the 27th of June by virtue of scheduled reopening dates, reduced capacity related to social distancing and their reliance on what one assumes, will be an uncertain and gradual return in public confidence in the near term,” Daniel McLoughlin chief executive of South Dublin County Council said.

“The extension of the three month rates waiver to six months is, in my view, the minimum necessary to protect local Government funding and to support the reopening of business,” he said.

Dublin city chief executive Owen Keegan said there was was also an issue of eligibility for the waiver scheme to be resolved.

“Somebody may have seen their turnover collapse but were not forced to close. A lot of businesses may be trading, but may not be profitable,” Mr Keegan said.

The city council had expected to take in just over €357 million in rates this year – about a third of its income. About €250 million of that remains outstanding. Dún Laoghaire-Rathdown County Council director of finance Helena Cunningham said the long-term impact of the virus on rates income could be “considerable” for the council.

“It is widely predicted that Covid-19 could be with us for at least another 12 months so the financial impact could be felt for some time.” The ability of the council to recover and function would “depend on the extent to which compensation is made available and the extent to which the council’s income level is maintained”, she said.

Fingal County Council also said it was critical support was maintained for the long term.

The Department of Local Government said the “Government is currently preparing further guidance for local authorities on the scope and application of the waiver” and the position would be reviewed “as part of a wider review of options to support enterprise and employment, and associated local authority funding implications, once the unwinding of public health restrictions has advanced”.