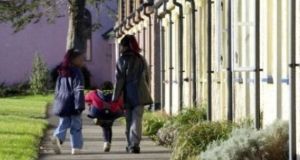 Some of these new modes of accommodation need to brought on stream by mid-2021 and several accommodation pilots should be set up to reflect the need for ‘urgent momentum’, notes the report. File photograph: Irish Times

Contracts for direct provision centres should no longer be renewed and all emergency accommodation centres housing asylum seekers should be closed by the end of 2021, the Irish Refugee Council (IRC) has said.

The council has also called on the Government to start introducing new accommodation models for asylum seekers as soon as possible rather than waiting for the existing backlog of protection applications to be cleared before launching a system to replace direct provision.

In its Implementing Alternatives to Direct Provision report, published on Wednesday ahead of the release of the Government’s White Paper next month, the IRC notes that while the Department of Children and Equality should oversee the new asylum system for now, the Department of Housing should take over responsibility in the long-term.

The IRC report, authored by the UK housing consultancy Campbell Tickell, recommends that a “blend” of housing models be used to replace direct provision including a combination of large and small Approved Housing Body (AHBs) accommodation, State-built accommodation and community renewal and social enterprise style provision.

Some of these new modes of accommodation need to brought on stream by mid-2021 and several accommodation pilots should be set up to reflect the need for “urgent momentum”, notes the report.

Given the Government’s “relatively poor” track record of procuring public housing, a new independent “programme management office” should be established to procure and develop accommodation while reporting to Government officials “at arms length”, it adds.

A clear strategy on how to end the current system is badly needed which should focus on closing emergency accommodation centres by the end of 2021 and not renewing direct provision contracts when they expire to ensure all new applicants are channelled into the new housing system.

AHB new builds and existing developments should provide 25 per cent of housing for asylum seekers while State build accommodation, including reception centres, should provide another 20 per cent by the end of 2024.

Existing urban and town and vacant property regeneration and renewal policies should also be used to accommodate people, it says.

As far as possible, “new accommodation supply models” should be pursued so that housing for asylum seekers is not drawn from existing sources, notes the report. However, the department of housing “must accept that some existing supply will have to be used for this purpose”.

While local authorities should be included in establishing this new housing system for asylum seekers, the report suggests setting up of regional “accommodation committees” to manage the delivery of accommodation so that sole responsibility does not lie with local councils.

“There is a risk that the question of whether local authorities should deliver accommodation is a distraction; the focus should be on identifying streams of accommodation and bringing them online as soon as possible,” note the authors.

The IRC report follows the publication last October of Dr Catherine Day’s advisory group recommendations as to what the new asylum system should look like.

The IRC has echoed the expert group’s recommendation that applicants who have been in the system for two years or more be given leave to remain for five years under a “one-of, simplified, case-processing approach” to clear the current backlog.

There are currently 6,986 asylum seekers living in direct provision and emergency accommodation centres, including 1,993 children. Some 1,010 of these have received refugee status and leave to remain but have not yet found housing outside direct provision.

Some 1,566 applications for asylum were made in 2020, a significant drop on the 4,781 applications made the previous year. By the end of 2020, applicants were waiting an average 9.8 months for their first interview.

However, there were significant delays in the processing of applications in 2020, with people waiting 18.3 months for a first instance decision on their case by the end of the third quarter. The Government has said it is committed to processing applications within nine months.