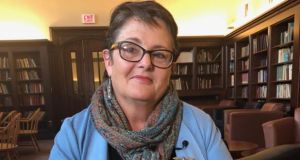 Mari Steed, who is now the US co-ordinator of the Adoption Rights Alliance and a committee director and co-founder of Justice for Magdalenes Research.

Mari Steed was 18 months old when she was taken from her 26-year-old mother at the Bessborough mother and baby home in Co Cork, where she was born in 1960, and adopted by a family in America.

She is now the US co-ordinator of the Adoption Rights Alliance and a committee director and co-founder of Justice for Magdalenes Research.

Visiting Bessborough 11 years ago for a documentary, the experience was “really eerie”, says Ms Steed, who now lives in the US state of Virginia: “I was getting kind of flashbacks. You know, how much of that we retain?

“I don’t know. I can’t say I have conscious memories, I’m afraid. I think I got chased around by a goose because I have an abnormal fear of them.”

During her time at Bessborough, Ms Steed was given experimental vaccines – something she only learned later as an adult, when she was able to gain access to her medical records from that time.

Those trials have also been acknowledged by the final report of the Commission of Investigation into Mother and Baby Homes, but the report also claims that “there is no evidence of injury to the children involved as a result of the vaccines” – a finding the merit of which Ms Steed disputes.

“They didn’t argue that there was a clear lack of consent from the mothers, obviously, as well as babies,” Ms Steed tells The Irish Times, speaking from her home. “But then they said that there was no evidence of any lifelong health effects, or ill effects to these children.

“How do they know that? Nobody followed me to the US. So that’s very questionable,” says Ms Steed.

She also questions the findings that there was no evidence that women were forced to enter the institutions, and no evidence of physical abuse.

“They’re saying ‘we found no evidence’ . . . that’s kind of concerning, because there is certainly ample evidence of any of these things,” says Ms Steed, who did get in contact with her mother, Josephine Bassett, before she died in 2013.

The reconnection was “the most bizarre, natural thing in the world”, she says: “The first time I spoke to her by phone, it was like a voice I knew, as if we had just spoken the week before, and that there wasn’t 42 years of a gulf.”

The scores of agencies and individuals involved in organising the adoption of children from mother and baby homes should now be investigated for “trafficking”, she says: “Let’s call it what it is. It has certainly not been looked into.”

Overall, she has “mixed feelings”, she says. “Yes, my life gets to be laid bare in a 3,000- to 4,000-page report that will become part of the Dáil record . . . part of Irish national history. They can’t deny it. We are acknowledged in that way.”