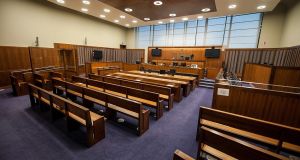 A consultant who raised the alarm and helped the woman involved in the State’s first coercive control trial has said everyone has a duty to call out bad behaviour if they witness it.

Last week, Daniel Kane (52) was jailed for 10½ years for coercively controlling and repeatedly attacking his former partner, including burning her foot, cutting her with a pizza slicer and headbutting her in the face. Kane was the first person convicted after a trial of coercive control, which became a specific criminal offence in 2019.

Dr Collins told RTÉ radio’s News at One that she had known patients who died as a result of domestic violence and she had felt compelled “to step up” and “go the extra mile” for the woman at the centre of the case.

There had been “red flags” in the woman’s case and Dr Collins was aware that intervention needed to happen early.

Coercive control was a very common presentation at hospitals, she said. Emergency departments were places of safety and if anyone felt unsafe, even if they were not injured, they should go to the emergency department. “Come and we will support you.”

There was a silver lining from the pandemic, added Dr Collins, in the form of the no visitors policy which meant staff could have a direct conversation with a patient without the perpetrator in the room.

In a situation where one witnessed coercive behaviour, it should be called out, she said. One could say “what you said was mean” and ask “did you intend to be hurtful?”

Dr Collins said the warning signs to watch out for were – delay in attending hospital from time of injury; whether the account they give is consistent with how the injury was sustained; establishing the home situation; the financial situation and she was particularly concerned about migrant groups where their visa was dependent on the perpetrator. “They feel they don’t have a voice here.”

There were many reasons why people stayed in such situations, she said, such as the lack of any financial control and practical reasons such as their children being settled in school in the area. “The controller has paralysed them.”

Victims were constantly undermined, told they were stupid, worthless and incompetent, she said. Very often staff in hospital knew that they could not change the circumstances immediately and had to accept that the victim might not be ready to accept help.